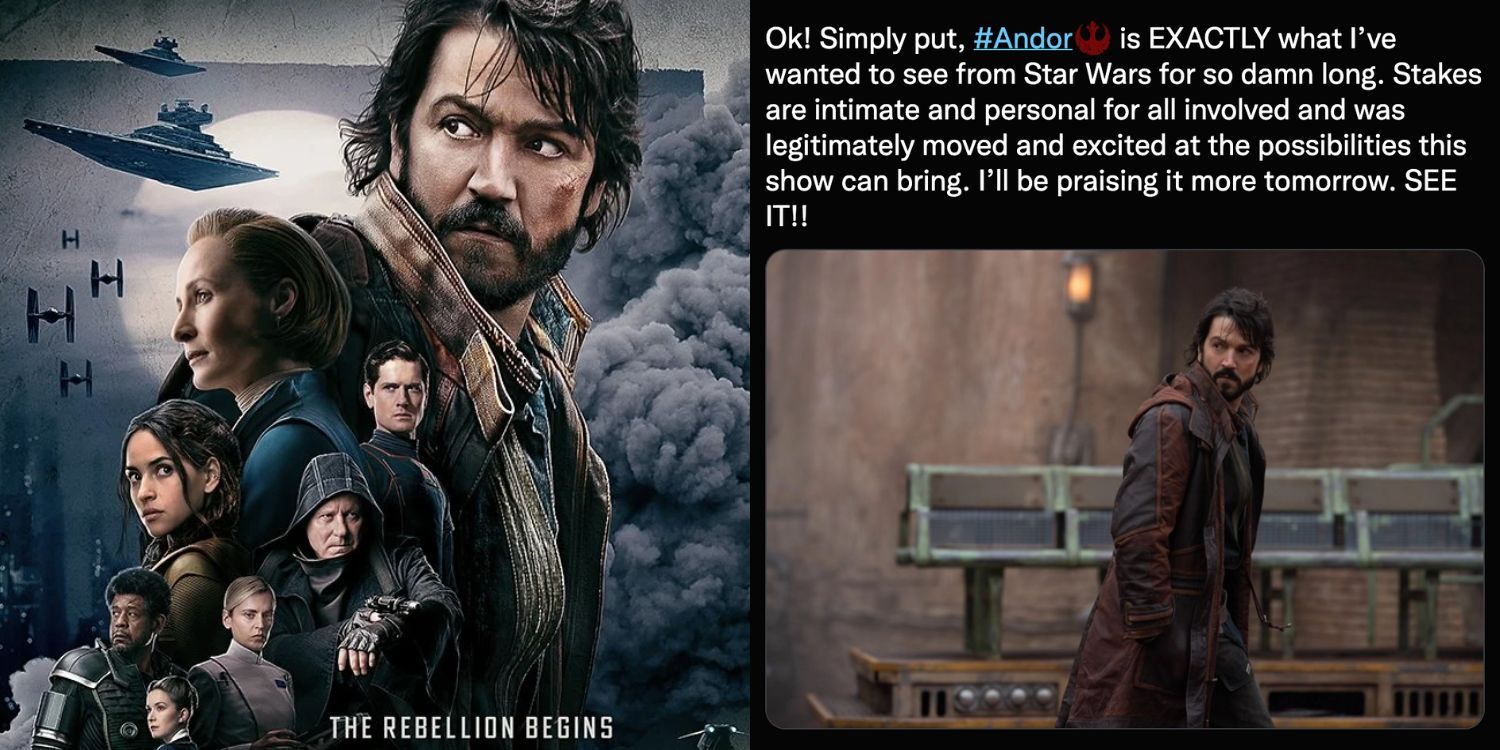 Warning! This list contains major spoilers for the first three episodes of Andor!

Disney+’s Andor has finally reached the masses on the streaming platform with a delightful three-episode premiere and already became one of the highest-rated series in the Star Wars universe on Rotten Tomatoes since The Mandalorian. So far, the fan consensus is overwhelmingly positive about the Rogue One prequel narrating Cassian Andor’s rise from thief to rebel, with a solemn tone and a grittier atmosphere distinct from other Star Wars content.

With another nine episodes scheduled and anticipation so high, fans will closely follow Cassian and his ally’s emotional adventure, and it won’t be the last with another season in development. From the stunning visuals to the thrilling narrative and all the enticing performances in between, Andor has already garnered a devoted fanbase sharing their reactions to it all on Twitter.

The Star Wars We’ve Been Waiting For

The most prominent reaction from many fans shares the sentiment that Andor is exactly what they’ve been wanting from the Star Wars franchise. After the shaky response to the sequel series, the focus has been shifted to television, yet Andor feels quite different from The Mandalorian and Obi-Wan Kenobi. It maintains the insular and specific, yet intense stakes and story of intrigue that Rogue One is beloved for.

It was a smart decision to release the first three episodes at once to entice audiences as they flow seamlessly and give strong introductions to the tone and characters fans will be getting familiar with for the next nine weeks. Rogue One was a special gem for the franchise when it came out, and Andor seems to be getting the same response from fans.

A Cinematic Experience At Home

It’s important to note that Andor will naturally feel different from the likes of The Mandalorian, The Book of Boba Fett, and Obi-Wan Kenobi for the simple fact it doesn’t take place on Tatooine. Beyond that, the pacing, tone, and aesthetic in Andor so far feel more like a film than a TV show, of which Diego Luna has stated that the series was developed as a long movie split into twelve episodes (via THR).

Another reason Andor stands unique among its brethren is that it was not filmed using the Volume – a video wall in which the background image is projected while filming to give the most authentic visuals. That technique has become the standard for Star Wars television starting with The Mandalorian and has started popping up elsewhere like in House of the Dragon, but Andor not using it keeps it more in line with how Rogue One was filmed.

The Andor Music Though

The music of Star Wars is iconic thanks, of course, to John Williams, but Rogue One was the first film in which he was not the main composer. Michael Giacchino – known recently for composing The Batman’s score and for directing Werewolf by Night – took on that role, but for Andor, Nicholas Britell has that honor. He’s an award-winning composer whose work for Succession, Moonlight, and Don’t Look Up many fans will recognize.

Andor seems to be yet another feather in his cap, in particular for the main title and theme as this viewer noted. The sequence isn’t as grand or extravagant as the likes of Game of Thrones, but its simplicity and power still resonated with many fans.

The Rise Of A Rebel

Of course, the series’ star, Diego Luna as Cassian Andor, has gotten a lot of attention from fans. Compared to the likes of Luke Skywalker or even Han Solo, Cassian is a morally gray character, but that’s what made people like him. As these memes prove, Andor’s a bit of an underdog, but these first three episodes have given fans a great deal to connect with personally.

Now, they’ve learned a lot more about Cassian’s origins as a thief and how he turned into the brave rebel willing to give up his life for the cause. More importantly, the emotional undertone of the flashbacks has resonated with many, learning that Cassian comes from a now inhospitable planet as likely one of its remaining survivors. Fans will keep an eye on his transformation and think about what place in his life he’ll be at the end of the season, especially if, like Rogue One, many of his castmates don’t make it to the end.

A Clever Retcon To Cassian’s Backstory

Something people have come to associate deeply with Star Wars is retconning. Darth Vader being Luke’s father and Leia being his sister were established as retcons, yet now they’re so ingrained in the culture and fandom that learning that can be surprising. However, in the case of Cassian’s backstory, it’s a bit more of a tricky situation, but Andor handled it deftly to share that what fans know isn’t the truth.

Before Andor, those familiar with Cassian’s background believed he had been born on the planet Fest in the Outer Rim. Yet. that was all a lie concocted by Cassian’s adoptive mother, Maarva – played by Fiona Shaw of Harry Potter and Fleabag fame – to keep him safe. He is actually from Kenari, and this retconning opens up the door to an unexpected mystery of what happened to his home and people.

It wouldn’t be a new Star Wars show if there wasn’t also a new droid to fall in love with, B2EMO. Like the best droids across the franchise, B2EMO – or Bee as Maarva and Cassian call him – has demonstrated a personality, though it’s not as bold as the likes of R2-D2, K-2SO, or L3-37. He can also even speak, being voiced and operated by Dave Chapman, who also puppeteered BB-8 throughout the sequel trilogy.

When Andor was first announced, many fans were expecting that Alan Tudyk would also return as K-2SO. That’s not the case as far as the general public knows for season 1, but surely, he’ll come into play down the line. In the meanwhile, fans have a great new droid, B2EMO, to relish.

Beyond Luna and Shaw, the cast for Andor is stacked with unique talents, including the fantastic Stellan Skarsgård playing Rebel Alliance contact, Luthen Rael. He is no stranger to major franchises, having been part of the MCU and Dune recently and has many impressive credits to his name, and it’ll be exciting to see him in the thick of the action in Andor.

The first three episodes didn’t delve deeply into his history, but he’s someone Andor and Bix can trust. Interestingly, some fans have noted from a TV spot showcasing a future episode that he might have a connection to a former Jedi, Plo Koon, in that he displays a breathing apparatus similar to the one Plo wore. Hence, Luthen could potentially meld Andor to the rest of the Star Wars canon without actually showcasing any Jedi or lightsabers.

Star Wars is not lacking in compelling and fantastic villains, but Kyle Soller’s Syril Karn might be something quite special. He doesn’t have the Force to back him up like Darth Vader or Kylo Ren, nor the overarching authority of Grand Admiral Thrawn or Director Krennic, yet there’s an ominous presence to him. Lucasfilm President Kathleen Kennedy at D23 did say Syril will be another villain that fans will love to hate (via D23), but many are finding him quite intriguing.

From his choice to stylize his uniform to his nervous, yet relentless energy, Syril is a nice addition to the long line of Star Wars antagonists. Already, he’s being established as a rival and foil to Cassian and the show’s deuteragonist, so some think he could end up defecting to the Rebel Alliance. Regardless, it will be very fun to see how he evolves throughout this season and beyond.

Cassian’s Got A Sister?!

Along with his altered history and a new home planet, fans also learn that he has a sister, and she is missing. Many people did not theorize this shocking outcome for Andor, with some predicting that characters like Ahsoka or Agent Kallus would show up. Nevertheless, this is a very compelling development. According to what was shown in the first three episodes, he was taken in by Maarva and her husband Clem Andor, and Kenari’s inhabitants were supposedly killed off.

It begs the question as to what happened when Cassian, then going as Kassa, was separated from his group. He could’ve returned to Kenari at some point to see if his sister was still there, so most likely she and the rest of their people – interestingly all kids and teens – might’ve been captured by the Empire.

Naturally, in response to those episodes, many fans are eager to see more of what director Tony Gilroy has up his sleeve. Some have said they’d want him to make even more Star Wars content like Andor and Rogue One – perhaps he could establish his own mini-franchise as Jon Favreau has with The Mandalorian and its spin-offs. Others are saying that they just want more people with Gilroy’s tone and approach.

Regardless, his work has clearly gotten them excited, and they can’t wait for more. While it will have to compete in some regard with the other major series like House of the Dragon and She-Hulk: Attorney at Law, Andor has a bright and enticing future ahead of it, and these fans are locked in.

NEXT: Every Star Wars Movie, Ranked By Rewatchability