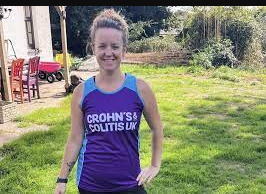 Dusica Roberts, a charity runner from Burnham-On-Sea, is preparing for next month’s London Marathon. Roberts will be running to raise money for a cause that is very important to her.

After her son was diagnosed with Crohn’s disease, Dusica decided to run 26.2 miles on Sunday, October 2, supporting a foundation that aids those with the condition.

She explained her decision to run for Crohn’s & Colitis UK to Burnham-On-Sea.com, saying, “Our kid Noah got unwell a few years ago, and we didn’t know why.” He was out of school for a long time, in a lot of pain, and in terrible shape.

Several rounds of bloodwork, an MRI, and a colonoscopy led to the conclusion that he has Crohn’s disease. After three surgeries and a long recovery period, Noah is now cancer-free!

According to Dusica, her marathon preparation is on track: “I know it’s going to be hard on an actual day, but I’m determined to get around, and my training is going well, and I’ve managed to do numerous longer runs.”

A big thank you to everybody who has donated to my fundraising efforts for Crohn’s & Colitis UK; I’ve earned $1,500 so far and greatly appreciate it.

Donations can be made at www.justgiving.com/fundraising/Dusica-Roberts or in person at the DusiCake Cake and Coffee Lounge on Abingdon Street; “I still need to raise another £1,000, and donations will be highly appreciated.”

Additionally, this week at DusiCake, I will be holding a cake raffle with over £100 in cake prizes to be given away; tickets are only £3, and the drawing will take place on Sunday, the 25th. All cupcakes will be half-price on Monday, the 26th, and Tuesday, the 27th, and 100% of the proceeds will go to the charity.

She says, “I feel privileged and emotional about all the support I’ve been getting offline and online; it’s been so lovely and has helped me on this road towards attaining my goal.”