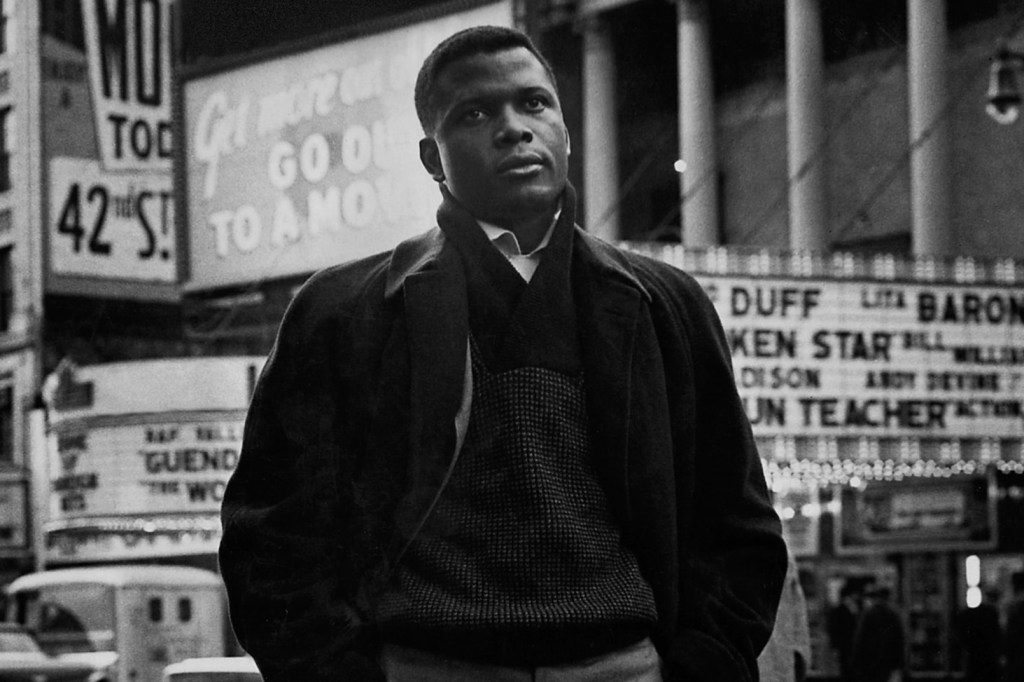 He was our first Black movie star, in a certain, classical sense of that term. Other Black actors had appeared in popular Hollywood movies, had even gone so far as to win an Academy Award for their work before Sidney Poitier made it big (just one person — Hattie McDaniel — and just one time, in 1939, but still). And other Black image-makers had labored in other corners of the industry, working behind and in front of the camera some time before Poitier made his way to the United States from the Bahamas in 1942. There had been Black directors and, because of segregation, Black movie houses; there had been a long tradition of vaudeville, and international celebrities like Paul Robeson and Josephine Baker, and a thriving minstrel circuit, which overlapped with and vastly overdetermined the paths of many Black actors trying to make it as legitimate stage and screen actors. Some of these artists even made a good deal of money.


Yet, for sheer improbability and symbolic import, that history is overshadowed by an extraordinary single year in the career of Sidney Poitier — 1967 — which saw the actor star, with top billing, in three major, highly profitable Hollywood releases: Guess Who’s Coming to Dinner, with Katharine Hepburn and Spencer Tracy; To Sir, With Love; and In the Heat of the Night, which won Best Picture the following year. These movies weren’t Poitier’s first box-office hits, nor were they his first brush with the highest of high-Hollywood elite. Blackboard Jungle saw international success in 1955, for example, and Poitier already had an historic Oscar under his belt for his performance in Lilies of the Field. What stands out about 1967’s record-breaking triumvirate is that Poitier was the draw, not just the lead — that he became the reason so many Americans and others, Black and white, were eager to buy a ticket.

This, only three years after the Civil Rights Acts of 1964. Only a year before the murder of Martin Luther King. Poitier was something people could agree on during an otherwise agitated, disagreeable era. Not everyone, obviously — not, say, the members of the Mississippi Ku Klux Klan who stalked Poitier and Harry Belafonte on a fateful trip taken on behalf of Southern activists; nor, probably, the McCarthy goons who tried to use Poitier’s admiration for the legendary Robeson, a courageous sympathizer with socialist movements abroad, against him.  It is not the case that everyone was rooting for Sidney Poitier.

And Reginald Hudlin’s new documentary about the life and times of the actor, Sidney, does not argue otherwise. (The movie is now streaming on Apple+). But a documentary of this genre — a career and life retrospective — would tend to dwell on Poitier’s inarguable ability to rise above such fracas. It’s a documentary styled, in that way, after Poitier, who did not dwell on the villains, even as he took them seriously. And he could do that! Because, well, here he is: His prominence has seemingly outlasted the ignorance.

Though it is being released after the actor’s January 2022 death, Sidney has the benefit of being able to feature a living subject. Poitier sat for interviews himself, and on top of that, the film features narration from his memoirs. Its guest list is also stacked. There are the Oscar-winning Black actors whose careers were made more possible by Poitier’s advancements (Morgan Freeman, Denzel Washington, Louis Gossett Jr., Halle Berry) and further legendary Black entertainers (Oprah Winfrey, Quincy Jones, Lenny Kravitz, Spike Lee) and white contemporaries (Robert Redford, Barbra Streisand), many of whom speak about Poitier on personal terms. Some of our great cultural critics (the late Greg Tate, Nelson George, Poitier biographer Aram Goudsouzian) chime in, too, as well as members of Poitier’s family, activists who stood beside him during the civil rights era, and, from archival interviews, Belafonte, Poitier’s closest friend and ally.


The result is about what you’d expect from an actor whose story is, in fact, stranger, more vibrant, than mythology might allow: It’s good, but it can’t always get its hands dirty. An hour and a half into its two-hour runtime and we’re still in 1968, flying through a social history ever twined to a personal one. That’s the understandable downside of Sidney, which is ultimately an effort to regard Poitier’s career with honor, acknowledging the personal flaws (Poitier’s first wife, Juanita Hardy, narrating the moment that she confronted Poitier about his affair with Diahann Carroll, for example) and the controversies (such as having to face the withering criticisms of Black revolutionary activists and public intellectuals like James Baldwin) while taking care to build them into the grander, more triumphant arc of a man who was genuinely great — a once-in-a-lifetime talent assigned the dreary task of carrying Black representation in Hollywood out of the dark ages, and who never complained.

The difficulty of making a documentary about the life of Sidney Poitier is, in part, that he was a symbol, that he knew as much and tried to live his life accordingly. The greater difficulty is simply a result of that life in itself: It’s too interesting. It ties into too much. You could tell an entire story about the fates of Black stage and film performers of the 20th century using Poitier as your central case; you could encompass everything from minstrelsy to Harlem’s American Negro Theater (where Poitier first got his start after moving to New York as a teenager), to Hollywood and social activism, to the knotty, contingent politics of Black movie stardom stretching from Hattie to Sidney to Blaxploitation onward — all stories that could sprout from the thick trunk of Poitier’s career. You could tell an entire story about race as Poitier experienced it, growing up on Cat Island and in Nassau, where the world was majority Black, and then coming to America, where he attracted the attention of the Klan at age 14 by walking through the front door of a white person’s house, simply because he didn’t know what it meant for a Black citizen to be somehow lesser. That’s an American conception. Poitier — as he would always say, recounting these anecdotes over the years — did not grow up with American conceptions.

Sidney, which basically proceeds chronologically, touches on all of the above, but none of it too deeply. How could it? That doesn’t quite excuse how little Hudlin’s documentary has to say about films like 1969’s The Lost Man, in which Poitier, playing a militant Black activist, tries to reckon with his reputation as a too-placid symbol who was out of step with the Black political rage of his moment. The movie comes up, but only as a segue into Poitier’s relationship with co-star and eventual wife Joanna Shimkus; you wouldn’t know what a curiosity this film was, which is a shame, because most people don’t even know that it exists, and because the steady flow toward progress into which Sidney wrestles the actor’s life could use a few more roadblocks like this, moments that feel more like question marks than neat historical certainties.

Sidney works as a tribute, or a beginner’s course. More probing questions about Poitier’s “meaning,” the impossibility of his position, the way it served as a measuring stick for taking stock of Black politics over many decades — these are problems bigger than, and largely beyond, this movie. They happen also to be some of the most urgent questions we can ask about Poitier’s career. Audre Lorde proclaimed that “the master’s tools will never dismantle the master’s house”. It’d be too easy to say Poitier’s legacy was proof of this or the opposite. The reality is far more complex. That reality is beyond this movie.