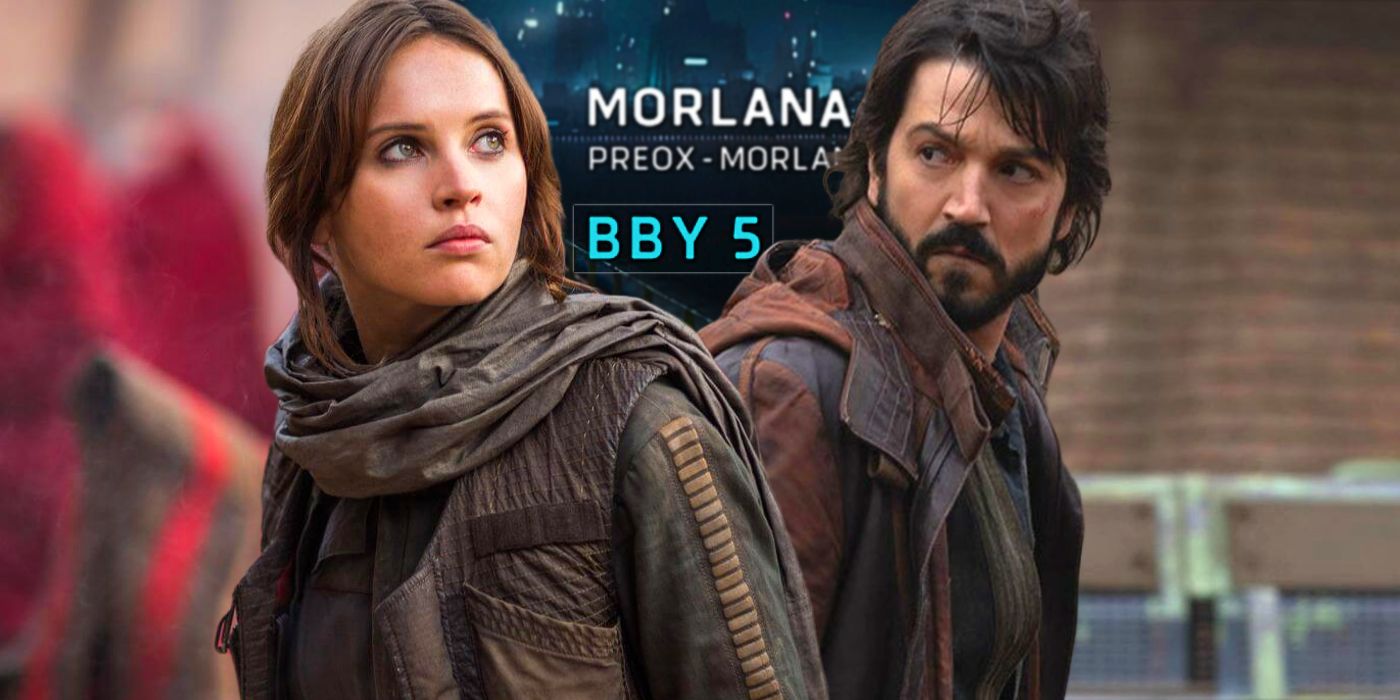 Warning: Contains mild SPOILERS for Andor episodes 1 and 2.Andor episode 1 begins by announcing it takes place in the year BBY 5, which is significant both for the show’s story and the wider Star Wars galaxy. Andor doesn’t stray too far from Rogue One: A Star Wars Story‘s timeline; that movie took place in the year 0 BBY (Before the Battle of Yavin), since it led directly into the events of Star Wars: A New Hope. Andor, then, winds the clock back just five years, allowing it to build the story of Cassian Andor (Diego Luna) from his fledgling role in the still-forming Rebel Alliance into the character seen in Rogue One.

This period in the Star Wars timeline has proved to be fertile ground for the franchise since Disney purchased Lucasfilm. It’s between the prequel and original trilogies that several high-profile stories take place, including (Rogue One aside): Star Wars: The Bad Batch (19 BBY); Star Wars Jedi: Fallen Order (14 BBY); Obi-Wan Kenobi (9 BBY); and Star Wars Rebels (5-0 BBY), plus multiple comics, such as Darth Vader, running throughout as well. It’s not difficult to see why it’s so attractive to storytellers and Disney execs alike: it’s close enough to the original movies to capture that same spirit and nostalgia, but with plenty of room for stories since it sees the rise of both the Galactic Empire and the Rebel Alliance.

Andor captures both of those perfectly, getting down to a rarely-seen level of the Empire and examining its middle-management, while gradually showing the different areas of rebellion coming together. That alone makes Andor‘s timeline of BBY 5 (or 5 BBY, as Star Wars has usually formatted it before now) crucial, because it’s both a critical turning point where the disparate rebel cells begin to coalesce, and a stage where Imperial ranks are so bloated and overconfident that it explains how they could be defeated by smaller forces. As noted in Andor episode 2, “pockets [of rebels] are fermenting,” in the galaxy. While the Alliance to Restore the Republic wouldn’t officially come into being until 2 BBY, with Mon Mothma’s resignation from the Senate and official declaration (something Andor will likely include in some way, given the character’s confirmed involvement in the series), by 5 BBY there were several factions who were not only well-known, but beginning to band together slowly but surely, and a network was forming in this year, which Andor will presumably show.

Alongside the different rebel cells beginning to network, BBY 5 is important in Star Wars’ timeline for a couple of other reasons. This is when part of Star Wars Rebels season 1 is set, meaning it was in this year that Ezra Bridger joined the Ghost Crew, or Spectres, itself a major milestone in terms of the Rebel Alliance’s ultimate efforts to defeat the Empire since Ezra goes on to play a key role in the Rebellion alongside Rebels‘ other characters. That even includes Rebels‘ Ghost ship and characters like Chopper appearing in Rogue One, meaning at least some members fought in the Battle of Scarif, properly connecting the different bands of Rebels. Star Wars Rebels season 1, episode 3 also included the Ghost Crew meeting C-3PO and R2-D2 during a mission; that ends with Artoo passing information about the Spectres to Bail Organa, who helped start the Rebel Alliance, which again shows how it was coming together in 5 BBY.

In terms of Rogue One, it was also in 5 BBY that Jyn Erso was abandoned by Saw Gerrera. Though not a major event in its own right, it’s an important piece of the rebel puzzle. Had Jyn stayed with Saw, then there’s a good chance she wouldn’t have ended up leading the fight in Rogue One itself, given Saw’s own extreme position at that point (if she had even survived that long). So from 5 BBY it’s possible to trace a throughline in their stories, too, that would eventually end up with the theft of the Death Star plans and a major victory against the Empire. Andor’s timeline is connecting a lot of these dots, allowing it to more fully tell the story of the Rebel Alliance.