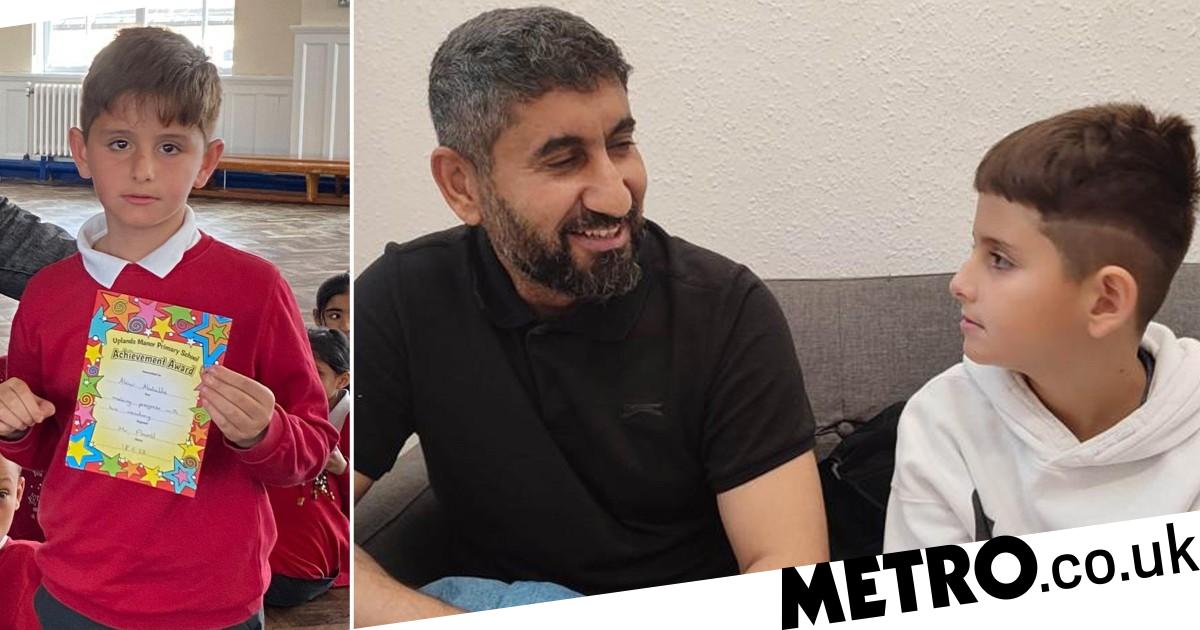 A nine-year-old boy is refusing to go to school after becoming terrified his parents will be deported to Rwanda while he is away.

Akar Abdalla and his family are seeking asylum to stay in Smethwick, Staffordshire, after fleeing conflict in Iraq.

But their immigration status is causing the boy ‘extreme stress’ after he learned about the controversial Rwanda deportation scheme.

His father, Kamal, says Akar ‘cried’ so much upon hearing the news he became sick with stress and has been unable to attend class for three weeks.

The Abdalla family have tried to claim asylum twice in three years, and have been waiting months for a decision on their latest application.

‘He won’t go to school,’ Kamal said. ‘He tells me he’s scared that, when he gets home, everyone will have been deported. He’s seen videos on social media and on the news of people waiting in deportation centres and families being ripped apart. They make him cry and he tells us he’s scared.

‘Whenever he’s scared we give him hugs and reassure him we’re not going to be deported. We’ve asked the Home Office to give us papers to say he is definitely safe but they haven’t given us anything.’

New Prime Minister Liz Truss is a strong supporter of the Rwanda policy, which would see migrants who arrive illegally in the UK sent 4,000 miles away to have their claims processed.

Kamal, 40, and his family fled Iraq after their house was burned down by Kurdish paramilitary group Peshmerga, which wanted to forcefully marry Kamal’s daughter to one of their members.

Although they escaped, his daughter, Rayan Abdalla, suffered severe burns to her arm in the attack.

‘Akar lives in constant fear – he’s scared every day,’ Kamal said. ‘We need something from the government, the situation has nothing to do with our son – it’s not fair on him. Before the Rwanda policy was introduced, he wasn’t like this.’

The Rwanda policy is being challenged in the High Court amid concerns over the East African nation’s ‘present and historic human rights record.’ The Home Office said it took the welfare and safety of those in its care very seriously.

Salman Mirza, a refugee and migrant legal representative, said: ‘The government doesn’t understand that children have become collateral damage in its continued hostile environment policy. Children read the news too and are petrified of being sent to Rwanda.’

The Home Office said it would not comment on individual cases but stressed a case-by-case assessment would take place for every individual considered for relocation. They said no-one would be relocated if it was ‘unsafe or inappropriate.’

A Home Office spokesperson said: ‘We are committed to ensuring asylum claims are considered without unnecessary delay but some cases can be more complex and take longer to process.

‘We have been clear from the start that no one will be relocated if it is unsafe or inappropriate for them, and our thorough assessment of Rwanda has found that it is a fundamentally safe and secure country, with a track record of supporting asylum seekers. The policy applies to people who arrived in the UK illegally on or after 1 January 2022.’