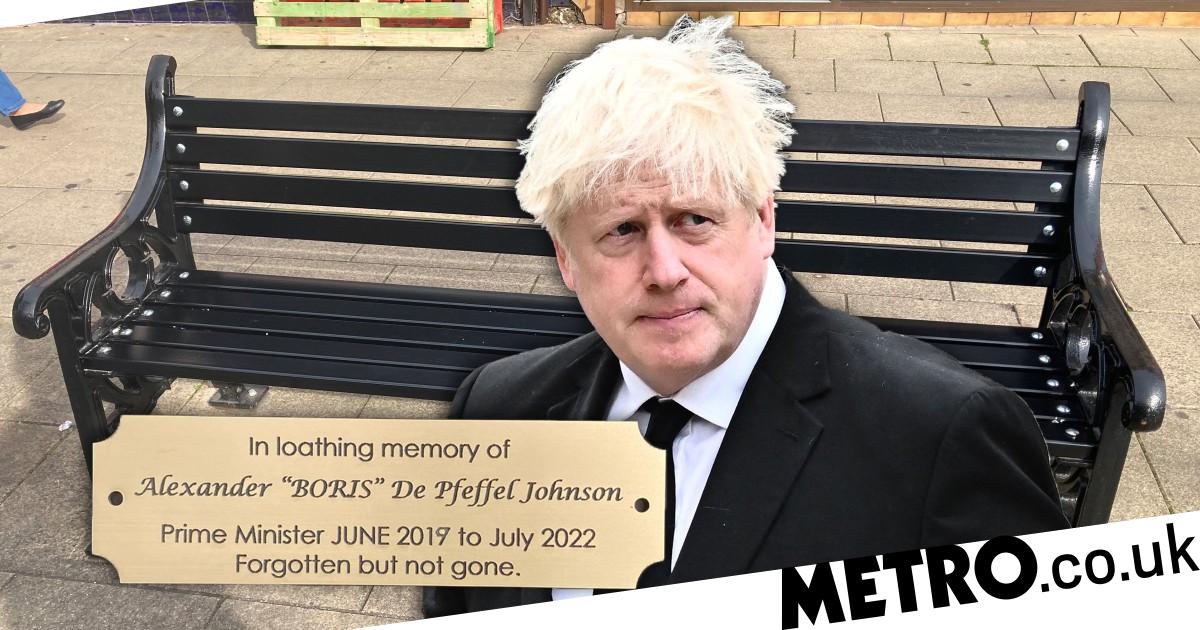 A bench plaque in ‘loathing memory’ of former prime minister Boris Johnson has been taken down.

The Tory politician’s popularity has had its ups and down, but as the scandals piled up this year, it nosedived until he eventually resigned altogether.

And it seems for the people of Atherton, Wigan, his legacy isn’t a good one.

A plaque was spotted on a Market Street bench last week that read: ‘In loathing memory of Alexander “Boris” De Pfeffel Johnson. Prime Minister June 2019 to July 2022. Forgotten but not gone.’

But according to Wigan Today, the epitaph has been taken down as of today. No one knows who installed it or who took it down.

Anita and Brian Thomas, whose Dry Clean Centre shop has the bench on their doorstep, said the plaque was something of a tourist attraction.

‘Everyone is coming now, two bobbies came and one was tying their shoelace on the bench when I asked them if they had seen the plaque, they were shocked,’ Anita said.

‘It seems to be getting famous. People are coming into town just to look at it.

‘We have no idea who put it up. It wasn’t us though. I like Boris but I giggled. Now it’s online, everyone has come down.’

To husband Brian, Johnson’s time in office was ‘one of the worst premierships in history’.

‘But he did have to deal with a lot. We didn’t put the sign up but we did have a laugh when we saw it,’ he said.

Anita added that the plaque is ‘one of the oddest things’ the couple have ever seen in the town centre in the 46 years the family laundromat has run.

Residents aren’t quite sure what to make of the bench’s dig at Johnson, let alone the ex-Tory leader himself.

One local, Lauren White, said: ‘I think it’s a waste of money for someone wanting to express an opinion. But I think people have done it to take the mick really.

‘A bench like this is normally for something sad or bereavement. I just thought it was brilliant, in a funny way, when I saw it.’

Her friend Susan Street said she’s no ‘fan’ of Johnson by any means.

‘I think it’s how a lot of people feel about him in the north-west. He should’ve gone earlier,’ she said.

‘I think he should’ve gone straight away. They’ve waited for so long to sort out this cost of living crisis [while they had a leadership election].

‘I can’t see anything good that has come from him, he was a bit of a laughing stock. Everyone from around the world looks at him and thinks he’s a joke so this sums him up well.’

Johnson’s political journey from journalist to leader of Britain came to an end when nearly 60 minutes quit in July over his handling of Chris Pincher.

Though he gave his party a landslide 80-seat majority and delivered on Brexit, his undoing was his own making.

These included several lockdown-breaking parties, Wallpapergate, seemingly having no clue what to do after the UK left the EU and saying he’d rather see ‘bodies pile high’ than take the country into a third lockdown.