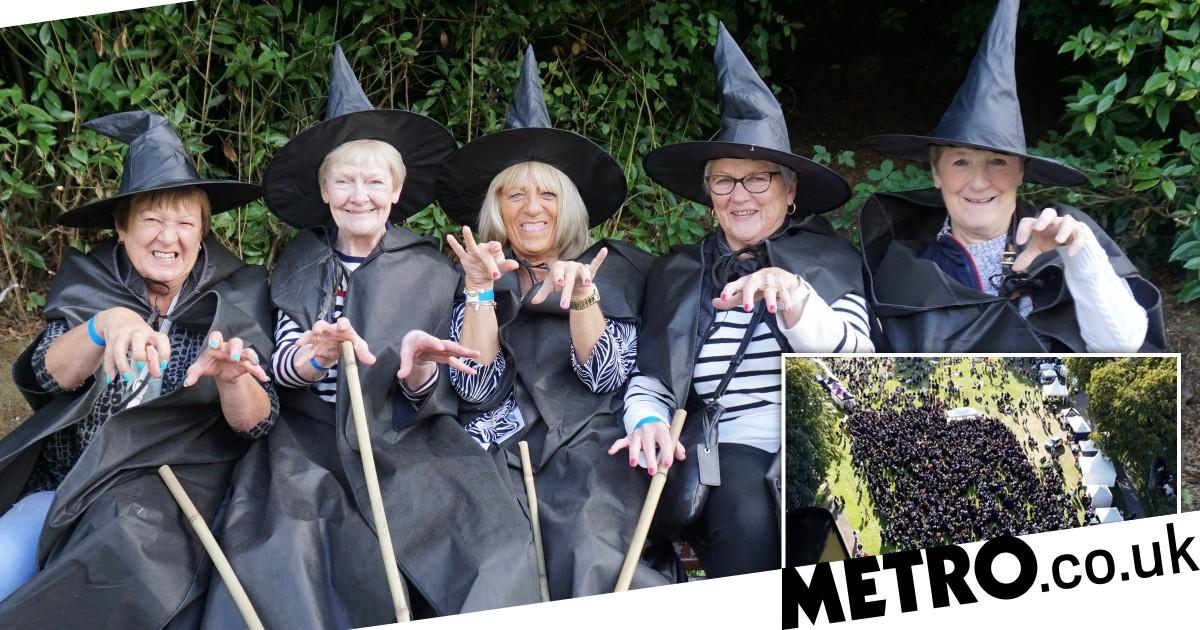 The world record for the ‘Largest Gathering of People Dressed as Witches’ has returned to its ‘spiritual home’.

Britain proudly held the record of 482 until 2012, when it was magicked away as 1,607 witches descended on the town of Sort in Spain.

But a small army of cloak-clad attendees, armed with brooms and black hats, sought to change that in Lancashire on Saturday.

Some 1,882 ‘witches’ were counted at the Pendleside Hospice Witch Festival – making the event a spellbinding success.

The group gathered near the scene of one of the UK’s most notorious witch trials: Pendle Hill.

Ten people were sentenced to death on the hilltop after Europe’s witch-hunting frenzy reached Lancashire in 1612.

Many of the accused came from two rival factions: the Demdike family and the Chattox family.

Both were headed up by two elderly widows who had fallen into severe poverty and lived in the Pendle Forest.

Historians believe the two matriarchs were in constant feuds, which led to accusations of witchcraft flying between both families.

‘Witches’ were hunted down after they were accused of causing strokes, having their blood ‘sucked by the Devil’ and even of murder.

While the morbid tale of the Pendle Witches is well known in Lancashire, it is lesser known across the globe.

But organisers of this weekend’s successful world record hope the history can reach a new generation.

Emmerdale star Samantha Giles – who plays Bernice Blackstock in the ITV soap – herself a follower of Wicca beliefs, was the first to be counted along with her husband Sean and daughters Eve and Olivia.

Children’s author Samantha, whose first book was ‘Rosemary and the Witches Of Pendle’ was overcome with emotion.

‘It’s just wonderful that the world record should return to Pendle’, she said.

‘It is its rightful home. I’m amazed how many people turned out for this momentous moment.’

There were strict rules in place to satisfy this weekend’s world record requirement.

All witches needed to be wear a black pointed hat, black cloak and have a broom with them. Organisers handed out items to ensure every entry counted.

The festival, and a sponsored walk held before, hopes to raise significant funds to help fund the care and services at Pendleside offered to people suffering advancing long term and life limiting illnesses and their families.

The hospice’s chief executive Helen McVey said: ‘While the Guinness Book Of Records has to verify and ratify our new record we are delighted at our attempt and also that we raised tens of thousands of pounds to help fund the care we give to hundreds of patients a year.’

A two-minute silence was held before the official count on behalf of the Queen, and a book of condolence was available for people to sign.