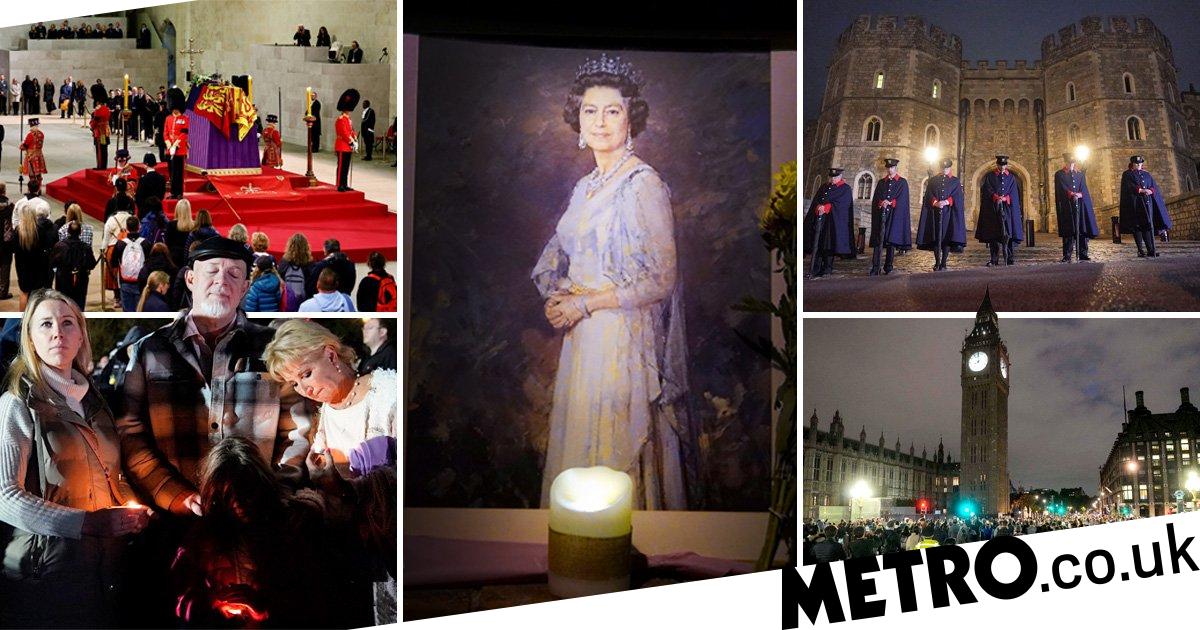 Silence fell across the UK tonight as people mourned the death of the Queen.

In London, Big Ben was due to strike once to mark the beginning of the moment of reflection, and again to mark its end.

But those marking the silence, from home and on Westminster Bridge, struggled to hear its chimes.

The UK Parliament confirmed the issue would be resolved by tomorrow’s funeral, with a spokesperson adding: ‘We are investigating this as a matter of urgency.’

People were invited to observe tonight’s one-minute silence privately at home or on doorsteps.

Many gathered in town squares to mark the minute’s silence together.

Prime Minister Liz Truss took to the steps of Downing Street as 8pm hit and solemnly bowed her head.

A small crowd of people in the queue for the Queen’s lying in state stopped near London Bridge and bowed their heads to observe the national minute’s silence.

They applauded to mark the end of the silence at 8.01pm.

As the minute’s silence approached, the Queen Consort also released a tribute to the Queen.

She recalled the late monarch’s ‘wonderful blue eyes’ adding: ‘I will always remember her smile.’

Camilla also spoke of how Queen Elizabeth II was a ‘solitary woman in a male-dominated world.’

She added: ‘I can’t remember anyone except the Queen being there.’

In Scotland, four lone bagpipers have played The Immortal Memory to mark the 8pm silence.

The music sounded out in Dornoch, Fort William, Inverness and Portree.

At Westminster Abbey, final preparations are being put in place ready for the funeral on Monday.

Big Ben will is due to ring tomorrow at one-minute intervals as the funeral procession departs the service.

A muffler will be used for the bell, which reduces the impact of the sound and creates a quieter tone.