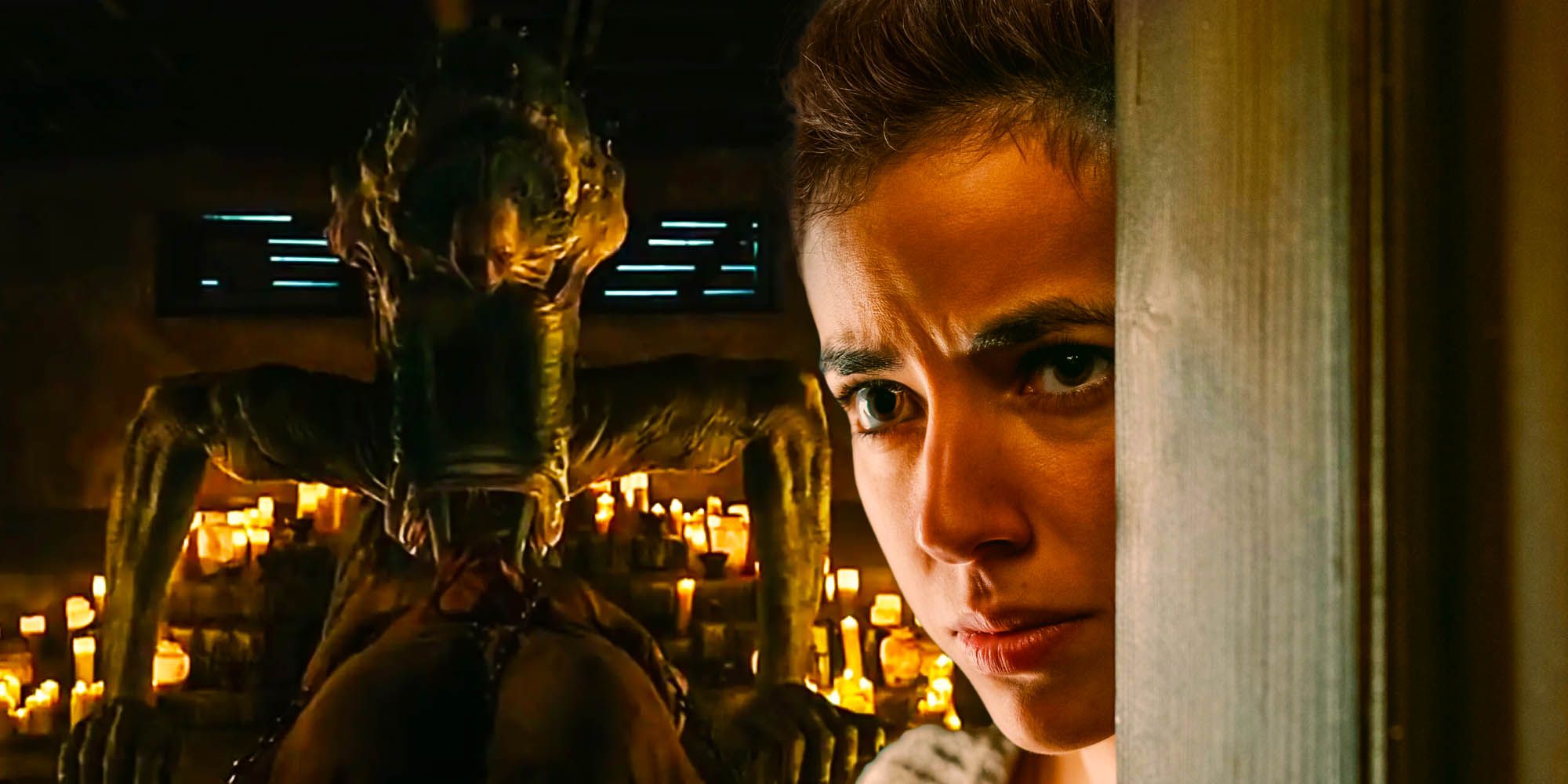 The adaptation No One Gets Out Alive is a breakout Netflix horror that fuses contemporary social issues with supernatural scares, but what happens in the movie’s bizarre ending, and what is it meant to mean? Based on the 2014 novel by The Ritual writer Adam Nevill, 2021’s No One Gets Out Alive is one of the best recent horror movies streaming on Netflix. The tense psychological thriller follows protagonist Ambar, who arrives in America illegally and struggles to find safe harbor upon arrival.

Ambar’s troubles begin when she settles in a rickety, run-down house advertised for female tenants only. Although her landlord Red is a shifty character, the rent is cheap and Ambar is desperate. She soon gets a factory job and befriends a co-worker but is consistently creeped out by the late-night noises of Red’s rundown home. No One Gets Out Alive initially appears to be a haunted house movie, but its third act takes a turn for more surreal territory.

Related: No One Gets Out Alive Cast & Character Guide

After a trusted co-worker makes off with her savings and her estranged uncle Beto refuses to help, Ambar is forced to stay in the haunted house as her female housemates go missing, and she is plagued by visions of caring for her late mother. Eventually, Ambar escapes to an all-night diner, only to be tempted back by Red promising to return her deposit. Once they return, she discovers Red and his brother are sacrificing tenants to a creature in the basement that emerges from the stone box seen in her – and her housemate’s – visions. The monster attempts to subdue Ambar with an immersive dream wherein she is taking care of her mother, which is a vision she’s had several times throughout the story. Here’s how the end of Netflix horror movie No One Gets Out Alive unfolds.

What’s In No One Gets Out Alive’s Stone Box?

The thing inside No One Gets Out Alive‘s stone box is not revealed until the final act, and it is an admirably surreal sort of monster. It seems to be a gigantic moth/spider hybrid, with long arms and human hands and a false face that hides its massive toothy mouth (with which it decapitates incapacitated victims). No One Gets Out Alive is a socially conscious horror that gives viewers little insight into the nature of the creature. What is clear is where it came from, as viewers get a glimpse of Red and Becker’s now-deceased father recovering the box from ancient ruins in what looks like South America according to the opening montage.

The hulking, lethal Becker has been sacrificing people to the terrifying movie monster for years, including their abusive father and mother (who is glimpsed as a ghost earlier in the movie). They lay victims on a stone altar before the huge creature emerges and bites off their heads, but interestingly, the film implies the thing is only able to consume willing sacrifices. When Ambar refuses to embrace the vision of her mother the monster is inducing, the beast backs off and returns to its mysterious box, no longer a threat to her. Clarity and exposition around the monster, its desires, and how it works were in far shorter supply in the movie than No One Gets Out Alive’s jump scares, but while the script doesn’t do a lot to explain the monster’s origins or nature, the finale does make it clear why Becker and Red sacrifice people to the beast.

How Does Ambar Escape The Monster?

After the creature tries to trap Ambar in a memory by taking the form of her dying mother, she fights back, and the monster recoils, retreating to its box. Ambar heads upstairs to take on Red and Becker, splitting the latter’s skull after a grueling fight before sacrificing Red in revenge. Although Ambar manages to kill both of them, she gets a gruesomely smashed ankle from Becker before subduing him. However, after she feeds the monster, offering the beast a sacrifice appears to have a miraculous regenerative effect as her broken foot heals in an instant. The horror movie’s twist ending sees Ambar glance back at the basement, with the implication being she may now begin sacrificing innocent victims to the monstrous being in exchange for this superhuman ability.

What Happened To Ambar In No One Gets Out Alive’s Ending?

It is not entirely clear what happened to Ambar in the ending of No One Gets Out Alive, but she clearly gained some powers after sacrificing Red, who she sees as one of the house’s many ghosts following his death. The fact her broken foot healed instantaneously after she has been brutalized could imply Ambar will continue to sacrifice humans to the monster in exchange for whatever gifts it offered Becker. However, this Twilight Zone-style twist of Ambar becoming the No One Gets Out Alive monster Itzpapalotl’s new devotee does not ring entirely true with her character, as until this point she has been more morally upright and decent, in contrast to Red and Becker.

Does Anyone Else Survive No One Gets Out Alive’s Ending?

Other than Ambar and the maybe-immortal monster, No One Gets Out Alive lives up to its titular promise in the brutal ending. No named character makes it out of the movie other than the aforementioned co-worker and Ambar’s boss from her short-lived factory job, neither of whom are seen again after the second act. Her uncle Beto is beaten to death by Becker, while Becker himself has his throat slashed and head crushed by Ambar. Ambar later feeds a mortally wounded Red to the monster, and her only surviving housemate is tossed off a stairwell to her death by Becker during the movie’s most gratuitously nasty kill. This is one of the movie changes from the No One Get Outs Alive book – the story continues past this point to a future where Ambar has to confront the beast.

What Is The Real Meaning of No One Gets Out Alive’s Ending?

No One Gets Out Alive has a cryptic ending that is not easy to decipher, but the movie can be seen as a commentary on the exploitative cycle of cheap labor. Red and Becker feed young women to the monster for personal gain much like Ambar’s co-worker preys on her desperation and dreams of a better life. The monster itself gives its victims a comforting memory to ease them into death and, at the movie’s close, Ambar appears to accept the lure of becoming its new master, exploiting new vulnerable victims and starting the process all over again. No One Gets Out Alive shines a harsh light on the realities of how young immigrants are exploited and abused through the prism of a surreal horror tale.

Will There Be A No One Gets Out Alive Sequel?