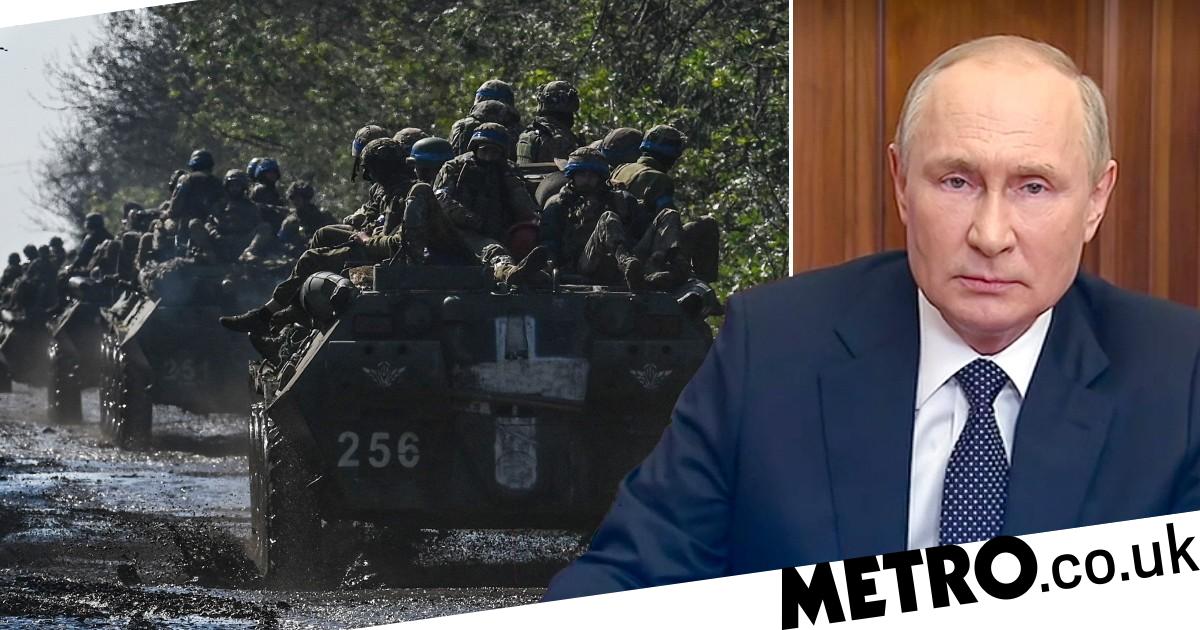 Vladimir Putin has issued a chilling warning to the world surrounding the war in Ukraine.

The Kremlin leader has claimed he is ‘not bluffing’ about his willingness to use nuclear weapons against the West.

He also used his speech to officially launch a partial military mobilisation in Russia.

Around 300,000 army reservists will be ordered to fight in Ukraine.

‘First of all it would be those who served in the army, have relevant army specialty and experience’, Putin said.

He added: ‘Those called up for military service will undergo additional military training before being dispatched to their units, taking into account the experience of a special military operation.’

He also addressed his willingness to use nuclear weapons against the world if provoked.

The Kremlin leader warned: ‘Those trying to blackmail us with nuclear weapons should know the tables could be turned on them. This is not a bluff.’

Moscow will respond with ‘all the means at our disposal’ if Russia’s territorial integrity is threatened, he added.

In his early morning address, delayed from last night, Putin spoke directly to Russians about his aims to liberate the Donbas region and continue the invasion.

He also said he supports the sham referendums for large swathes of the country.

In the pre-recorded clip, Putin said: ‘Citizens of Donetsk and Luhansk People’s Republics, Kherson and Zaporizhzhia and other areas free from the Nazi regime.

‘We will be talking about the steps of protecting our sovereignty, support of the will and desire of our citizens to decide their will themselves.’

Putin also claimed that the West has demonstrated an aim to ‘destroy’ Russia and that it has tried to turn Ukraine’s people into ‘cannon fodder’.

Despite announcing plans to deploy hundreds of thousands to fight in Ukraine, Russia claimed only 5,900 people have been killed in Ukraine.

Following huge gains by Ukraine in recent weeks, many had hoped the tide had turned and that an end was in sight for the war.

But the Kremlin leader’s dramatic speech demonstrates the opposite.

In his address, he also ranted that the West ‘do not want peace’ and instead wants to ‘weaken and destroy’.

Speaking to Sky News following the broadcast, foreign minister Gillian Keegan said the declaration was a ‘worrying escalation’ of the war in Ukraine.

Putin’s speech was originally tabled for live broadcast at 6pm UK time last night, but more than two hours later there was still no word of it appearing.

A former Nato military chief said the unexplained delay was sign of ‘chaos behind the scenes’, with ‘real questions’ remaining over whether the Russian war machine was up to enforcing Putin’s plan.

This is a breaking news story, more to follow soon… Check back shortly for further updates.