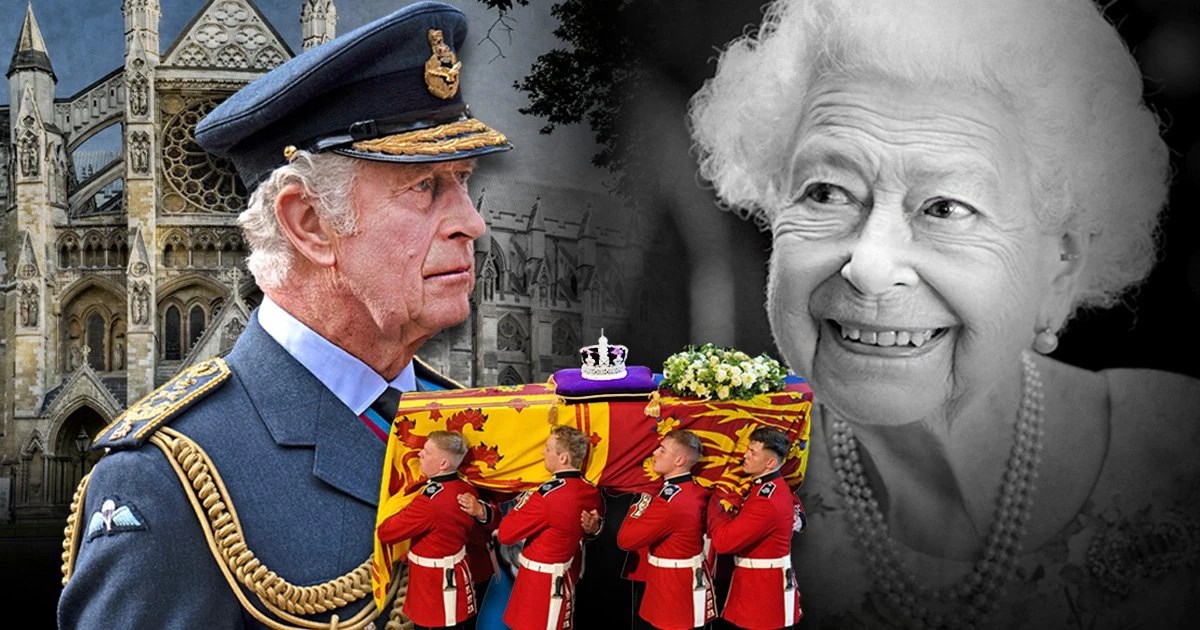 Today, Monday, September 19, an estimated 4.1billion people around the world will tune in to watch the funeral of Queen Elizabeth II.

Preparations for the historic day have been underway since the monarch’s death on Thursday, September 8.

The day has been declared a national bank holiday in the UK so people can watch the service and pay their respects to Her Majesty in what is shaping up to be the biggest TV broadcast ever.

Here are the all-important timings for the Westminster funeral, Windsor committal service, and processions.

6.30am: Lying-in-state at Westminster Hall ends

The Lying-in-State of Her Majesty Queen Elizabeth II in Westminster Hall came to an end at 6.30am on Monday morning.

Since Wednesday, hundreds of thousands of mourners have braved long queues in order to pay their final respects to the Queen.

Well-wishers were turned away to ensure that everyone in line could have a chance at seeing Her Majesty’s coffin before the cut off.

8am: The doors to Westminster Abbey open

The doors to Westminster Abbey, where the funeral will be held, open three hours early to the 2,000 invitees.

The Abbey is the resting place of Kings and Queens including Elizabeth I – going back 700 years.

As well as members of the Royal Family, world leaders, monarchs, past and present members of the Queen’s Household, 17 recipients of the Victoria Cross, and other notable figures will attend the ceremony.

Heads of state and other Royal families from across the world are seated in the South transept, while recipients of the Victoria Cross and other honours are in the North transept.

Prime Minister Liz Truss is joined by the leaders of Scotland, Northern Ireland, and Wales in the choir stalls.

10.44am: Procession of the Queen’s coffin to Westminster Abbey

At this time, the coffin leaves its current location of Westminster Hall and travels in the State Gun Carriage to Westminster Abbey.

A procession, led by the Royal Navy, leads through New Palace Yard, Parliament Square and Broad Sanctuary and the Sanctuary, before reaching the Abbey.

King Charles III and his siblings Princess Anne, Prince Andrew, Prince Edward join the procession, along with his sons Princes William and Harry.

10.52am: The Queen’s coffin arrives at Westminster Abbey

Joined by Justin Welby, the Archbishop of Canterbury, the coffin is placed in front of the high alter.

11am: The Queen’s funeral begins

The hour-long funeral service, led by the Dean of Westminster, begins at 11am.

The service and processions are broadcast live on BBC One, ITV and Sky News for those who wish to watch at home.

Lessons are read by Ms Truss and the Rt Hon Patricia Scotland KC, the Secretary General of the Commonwealth.

The Archbishop of Canterbury also gives a sermon.

The Last Post, a musical ‘call’ associated with military ceremonies and wartime remembrance, plays from the Lady Chapel at the end of the service.

The distinctive tune is usually played on a trumpet, cornet, or bugle, and is seen as a final farewell to symbolise that the duty of the fallen soldier was over and they could rest in peace.

The Last Post is followed by two minute’s silence to be observed throughout the UK.

The National Anthem then brings the State Funeral Service to a close.

12.15pm: The Queen’s coffin is taken to Windsor

Following the funeral, the Queen’s coffin travels by gun carriage from Westminster Abbey to Wellington Arch near Hyde Park Corner, arriving at 1pm.

The Procession includes detachments from the Armed Forces of the Commonwealth. Minute Guns are fired in Hyde Park by The King’s Troop, Royal Horse Artillery, and Big Ben tolls throughout the duration of the Procession.

At Wellington Arch, the coffin is transferred to the State Hearse to travel to Windsor.

As the State Hearse departs Wellington Arch, the Parade gives a Royal Salute and the National Anthem will be played.

The hearse takes the following route to Windsor:

3.06pm: Procession of the Queen’s coffin to St George’s Chapel

Now in Windsor, the final procession to St George’s Chapel at Windsor Castle, via the Long Walk, begins at Shaw Farm Gate on Albert Road.

Once again, there is a congregation of Royal Family members and The King behind the State Hearse.

The procession heads towards St George’s Chapel via the Long Walk at 3.10pm.

Minute Guns are fired on the East Lawn, Windsor Castle by the King’s Troop, Royal Horse Artillery, and Sebastopol Bell and the Curfew Tower Bell tolls.

At 3.20pm, the congregation begin to enter St George’s Chapel for the committal service.

Five minutes later, at 3.25pm, some members of the royal family who didn’t join the procession arrive at St George’s Chapel for the service.

At 3.40pm, King Charles III and other royal family members who are walking in the procession join it at the quadrangle on the north side as it passes into Engine Court.

And at 3.53pm, the procession arrives at the bottom of the West Steps of St George’s Chapel in Horseshoe Cloister. The bearer party lifts the coffin out of the hearse and takes it up the West Steps.

Now that the Queen’s coffin is in the chapel, a televised Committal Service takes place, held by the Dean of Windsor.

The service is broadcast live on BBC One, ITV and Sky News for those who wish to watch at home.

Accompanying the Dean of Windsor, there are prayers said by the Rector of Sandringham, the Minister of Crathie Kirk, and the Chaplain of Windsor Great Park.

The King and members of the Royal Family are in attendance at the ceremony, as well as past and present members of the Queen’s Household, Governors General, and Realm Prime Ministers.

The Choir of St George’s Chapel sings during the service.

The Imperial State Crown, the Orb and the Sceptre are removed from the Queen’s coffin ahead of the final hymn.

The King then places the Queen’s Company Camp Colour of the Grenadier Guards on the coffin. At the same time, The Lord Chamberlain ‘breaks’ his Wand of Office and places it on the casket.

As the Queen’s coffin is lowered into the Royal Vault, the Dean of Windsor says a Psalm and the Commendation before Garter King of Arms pronounces Her Majesty’s styles and titles.

The Sovereign’s Piper plays a Lament and The Archbishop of Canterbury pronounces the Blessing. The National Anthem is sung at the end of the service.

The Queen is then interred in the King George VI Memorial Chapel in Windsor Castle privately.

The chapel is named after the Queen’s father, who was buried there in 1952 after his death earlier that year.

Queen Elizabeth, the Queen Mother was buried in the chapel after she died aged 101 in 2002.

Princess Margaret also died in 2002, seven weeks before the Queen Mother. Her ashes were brought to the chapel following the Queen Mother’s death so she could be with her parents.

Prince Philip, the Duke of Edinburgh, will move from the Royal Vault in St Georges Chapel to the King George VI Memorial Chapel once the Queen is buried there.

Later in the evening: Private burial of the Queen

A Private Burial takes place in The King George VI Memorial Chapel, conducted by the Dean of Windsor.

The Queen is then buried together with her husband Prince Philip, the Duke of Edinburgh – to whom she was married for 73 years until his death in April 2021.