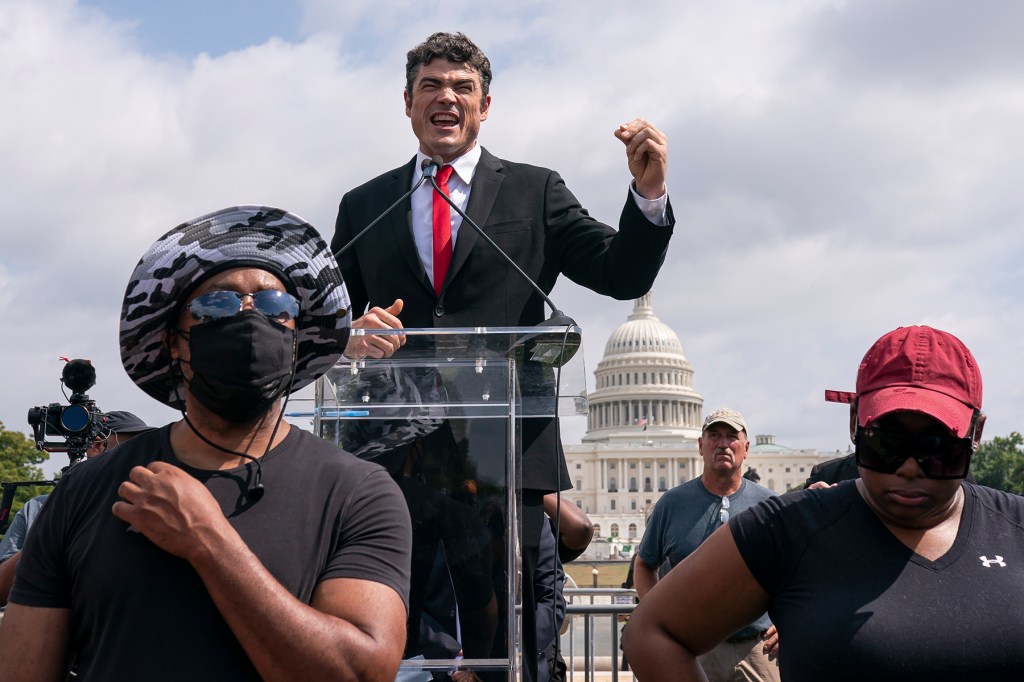 When far-right Republican Joe Kent announced he was running for Congress in February of 2021, he also signed up for Gab — a social meda platform that even fellow Republicans have called a “cesspool of bigotry and anti-semitism.” But for almost a year after Kent’s announcement, his Gab his account didn’t exactly take off, languishing at a couple thousand followers well into the summer.

Then something funny happened. In December, months after he’d announced his candidacy, Kent’s Gab account saw a sudden spike of over 7,000 new followers, according to analysis for Rolling Stone by Alethea Group, a tech firm that analyzes disinformation, and the Stanford Internet Observatory. Perhaps more surprisingly, 20 percent of all new Gab accounts created during that period followed Kent’s campaign.

The sudden spike of new users to Gab immediately following Kent’s campaign account suggests the Gab platform was intentionally forcing new users to follow the account and drive up its readership — a potential sign that a notoriously antisemitic social media company could’ve been rooting for Kent’s candidacy.

“Kent appears to have gotten well over half of his followers very suddenly in December of 2021,” David Thiel, big data architect and chief technology officer of the Stanford Internet Observatory who reviewed Gab data for Rolling Stone. “Of those, many only follow Kent, Andrew Torba [Gab’s founder and CEO], and Gab itself — the latter two being accounts that are automatically followed on signup. While not conclusive, it is highly likely these accounts followed him automatically,” Thiel told Rolling Stone.

Kent — who’s endorsed by Donald Trump and has echoed the former president’s election denials — is running for the U.S. House in a Washington state district formerly occupied by Republican Rep. Jaime Herrera Beutler. He defeated her in an August primary, and now faces Democrat Marie Gluesenkamp Pérez in November’s general election. Rolling Stone asked both the Kent campaign and Gab’s CEO whether Kent had ever paid the social media company to promote him. Neither answered the question.

Whatever the source, the apparent effort by someone to bolster Kent’s Gab following highlights the warm embrace that a vanguard of Trump-endorsed politicians have given to far-right figures and groups popular on Gab. Kent, a former Special Forces soldier with multiple tours in Iraq and Afghanistan, has hired a Proud Boy on his campaign, offered far-right Patriot Prayer leader Joey Gibson a speaking slot at a fundraiser, and talked campaign strategy with white nationalist activist Nick Fuentes.

Gab has enjoyed a symbiotic relationship with candidates like Kent who can push out messages deemed too extreme by mainstream social media outlets (Kent has run afoul of both YouTube and Twitter’s content policies). And candidates like Kent also lend an air of legitimacy to a platform whose founder, Andrew Torba, uses it to “promote antisemitism, right-wing extremist ideologies and conspiracy theories,” according to the Anti-Defamation League.

In an appearance during a Twitter Spaces event hosted by both Kent and Arizona Republican Senate candidate Blake Masters, Torba used Kent’s presence on Gab to pitch Masters on joining the social media network. “We have a sleeping giant here. I know that, I think Joe is already on Gab,” Torba said. “My question for Blake is: Blake, when are you getting on Gab?”

Over the years, Gab users and researchers have noticed that the platform has privileged a rotating cast of accounts by making new accounts follow them without explanation. Recipients of the auto-follows have included an account unaffiliated with but reserved for Donald Trump, Fuentes, Qanon enthusiast and 8kun administrator Ron Watkins,

It’s not certain how or why Kent’s campaign got the sudden burst of followers in December. Rolling Stone asked Kent spokesman Matt Braynard, himself a Gab investor, whether the Kent campaign or its consultants had ever paid for or solicited promotional assistance from the platform. Braynard did not answer that question but did respond to Rolling Stone’s questions about why Kent had an account on an antisemitic social media platform and what it would say to Jewish voters concerned about it

“Andrew Torba publicly attacked Joe Kent and rallied antisemites and white nationalists against Joe during the primary election because of Joe’s embrace of inclusive populism and his support for our ally Israel,” Braynard wrote in an email. “Torba even hyped an anti-Semitic billboard campaign attacking Joe that was in violation of campaign finance laws. Their efforts failed.”

As groups like the Republican Jewish Coalition have called on Republicans like Mastriano to disassociate themselves from Gab, Kent has stubbornly refused, even far-right Republicans who have since distanced themselves from the platform. He posted there as recently as this week, railing against “amnesty” and “illegal immigration.”

But Braynard says “No social media platform can match the volume of antisemitism, racism, hatred, and calls for violence found on Twitter, yet every prominent official in the country and every journalist is on that platform because it is functionally a town square.” Kent, he says, “will continue to use Twitter and other social media platforms to spread his message of inclusive populism.”

Pointedly, Braynard declined to discuss the causes behind Kent’s account’s rapid growth in popularity last December.  Adding to that mystery, many of the new accounts from that period appear to be inauthentic, according to an analysis by C. Shawn Eib, a senior analyst at Alethea Group.

“Alethea Group assesses that accounts were likely batch created because of the high volume of accounts created in a short period of time, and because their common feature is that they only follow specific accounts,” Eib says. “The accounts we assess as likely inauthentic also don’t behave how we’d expect users to engage with social media – they neither post nor follow other accounts.”

Kent also received a smaller bump of 494 new followers two months later, in February 2022. All of the accounts were created on the same day, February 4. 302 accounts, the vast majority of them, followed the same three accounts—Torba, Gab, and Kent.

Asked about his platform’s treatment of Kent, Torba — a provocateur — responded only: “I do not speak to reporters who aren’t Christian. Repent and accept Jesus Christ as your Lord and Savior. No further comment.”