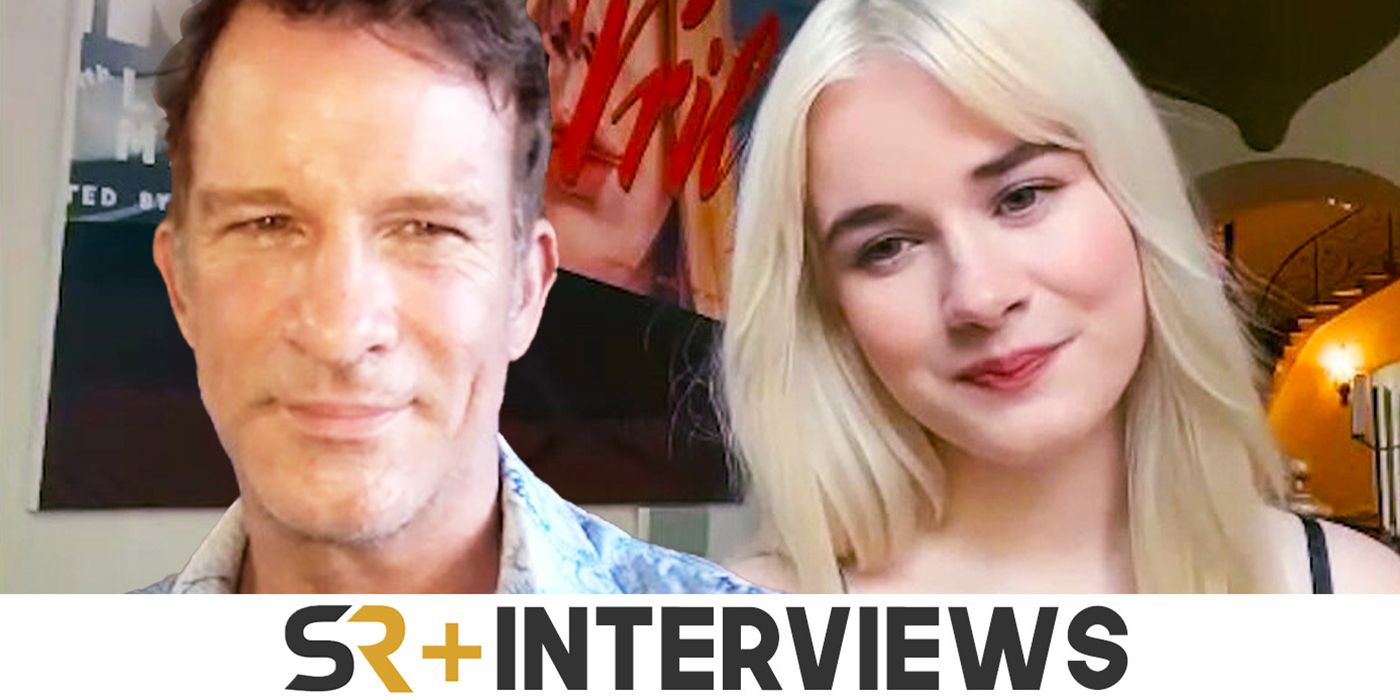 Thomas Jane is teaming up with his real-life daughter Harlow Jane for the action-thriller Dig. The two star in the film as Scott and Jane Brennan, a widowed father and his daughter hired for a large demolition job by a couple with darker motives.

Alongside the Janes, the cast for Dig is led by Emile Hirsch and Liana Liberato. The film hails from director Asher Levin on a script from Banipal and Benhur Ablakhad.

Ahead of the film’s release, Screen Rant spoke exclusively with stars Thomas and Harlow Jane to discuss Dig, bringing their real-world relationship to the movie, learning ASL for their characters, and more.

Screen Rant: I watched Dig earlier this morning, and it was an absolute blast. I didn’t know what to expect going in, and I truly enjoyed it. What about it really spoke to both of you?

Thomas Jane: Well, I mean, it’s a father-daughter situation that I think a lot of parents can relate to. [Chuckles] Things happen, things aren’t always rosy with your relationship with your kid. Things happen that you might be partially responsible for, or you might not, sometimes s–t just happens. But in this case, the father in this film is partially responsible for the events that drive a wedge between me and my daughter and I thought that was valuable to explore in an entertaining movie that also has great opportunity for some terrific characters.

To work with Emile Hirsch and Liana, who plays his girlfriend, and of course, what really turned me on was a possibility of getting to act with my daughter. She read the script, and she’s like, “Alright, I want to audition for this. This could be cool.” Regardless of what she thinks that she would have gotten the part anyway, that’s not true, because if she couldn’t act, I’m not gonna put myself or her through that. I don’t want to have a record of that, I certainly don’t need that, but the fact of the matter is she blew everybody away, blew me away.

Harlow Jane: It was my first real job, so I’d never done it before. But I learned so much, it was a very valuable experience, so I’m really grateful that I got the opportunity, but I think I just really wanted to be covered in blood. That’s really what me going, I was like, “Yes!” [Laughs]

Thomas Jane: [Laughs] That was the scene that got you in, you were like, “Alright, I wanna do this now.”

Harlow Jane: Oh yeah, I read that, and I was like, “I’m in.” But, also, I saw Jane’s anger in myself, in my younger self, I sort of have meditated that out. I saw it in me, I understood it.

Thomas Jane: Oh yeah, you understand that, all right. You were just telling me that you remembered — because a lot of it is at night, and we were coming home from work one morning, it was like eight o’clock in the morning, and we were covered in blood. What was that?

Harlow Jane: Yeah, we were coming home from work, it was like eight or nine in the morning, we were going to this like pretty busy hotel. I remember I was covered in blood, you were in dirt. I was bloody as hell, though, bloody head-to-toe, my hair was messed up, and I was walking in with you and Asher, the director, and I like said to them, “We need to be very careful, because it looks like you guys have just done something terrible, and I look like I’m in trouble. We need to be very scared.” [Chuckles] But I also felt so cool, like walking through with my little headphones in.

Thomas Jane: It turned some heads in the lobby. [Laughs]

Harlow Jane: Definitely, but the concierge got used to it pretty quick.

Thomas Jane: That’s true, they had that look like, “Should we call the cops, what’s going on here?” They slowly got the picture.

I think at that point they probably figured you can handle your own after one or two times of coming in.

Harlow, one of the things I love about your character is her having to use ASL. What that was like for you learning that, were you already familiar with ASL prior to the film, or did you have to learn it from scratch once you signed on?

Harlow Jane: I basically had to learn it from scratch, I knew a couple of letters, literally just basic alphabet. But no, I essentially had to learn it from scratch, and I remember the script wasn’t totally optimized for ASL, we kind of figured that out in the learning process of things. So working with my teacher, I think it made Asher and the writers a little mad, because we kind of had to change a lot of my lines just to make it realistic.

I’d never learned it before, and I wasn’t totally sure how to feel. Because I can hear, I’m a hearing person, but at the same time, this girl lived the majority of her life with her hearing. So to have that taken away nine months prior to the happenings of this movie, I think it was kind of important that it just adds another layer to that, like, “This is so f—d, like, wow, my life just gets so much better every day.” [Laughs]

Thomas Jane: Yeah, there’s certain things that you can’t say in ASL that were in the script, and they had to make the adjustments of like, “Okay, how would you get this idea across?”

Harlow Jane: Yeah, and also the fact that he was a bit reluctant, his character, to learn ASL, that just adds another layer of, “We can’t talk, you can’t hear me, why aren’t you listening?”

Thomas, I know that most of Harlow’s dialogue was in the script, but did you also learn some ASL to help with the character?

Thomas Jane: I think that my character doesn’t want to take responsibility for the full impact of repercussions of what has happened. I’m reluctant to even acknowledge that ASL is something that I need to learn, I’m drawing on pads and showing her what I want. So, there’s an evolution throughout the film of his acceptance of reality.

Thomas Jane: Oh, we didn’t have to do any work at all. [Chuckles]

Harlow Jane: I think we kind of did a call back to when I was like, 12, that early adolescent [time], there’s a lot of things going on, I’m really mad all the time.

Harlow Jane: I was a lot better at 17, 16 I really turned turn the corner, let’s give me some credit here. [Laughs]

Harlow Jane: We didn’t have to work too much on that, we kind of had experience. [Chuckles]

Thomas Jane: We had the experience, you know, it’s just great. There’s something cathartic about being able to exorcise that in a safe space. We’re making art here, but we blurred the line, and that was also part of the challenge and the fun of doing something like this. That’s a unique experience where there is truth to what we’re [doing], it’s there all the time. Every time we look at each other, and to be able to feel safe enough to capture that on film’s important.

Harlow Jane: Asher did try to make it clear to us, he was like, “I did not sign up for family therapy, that’s not what we’re going to do here.”

What was the biggest creative challenge to the hearts of your characters?

Thomas Jane: Wow. Creative challenge. I mean, you have to feel safe enough and naked enough to be able to express yourself in a way that’s truthful, and normally you have a buffer of this is just pretend, because this other actor I’m working with, I don’t actually really know. She goes home at night, I don’t know what her life is, I don’t know who she is, but except for when we’re rehearsing and acting together or getting coffee at the craft table. That’s the extent of our relationship. Harlow and I, our relationship goes back to the day she was born, I cut Harlow’s umbilical cord with my pocket knife, so that alone can can can be a challenge, but it’s also the fun of it.

Harlow Jane: Definitely, and also going from that experience, for me, on what to me is kind of my first real job. Going from having that connection to then going on a set where, “Okay, we’re all strangers again, and I don’t know any of you,” it was really interesting, that posed sort of its own creative challenge separately. But also, too, for me just learning ASL was a challenge, because I’m super uncoordinated with my hands. I kind of don’t know left from right.

Steve Brennan is trying to piece together a life shattered by a road rage incident that killed his wife and left his teen daughter Jane deaf and resentful of him. Still hoping to mend things with Jane a year later, Brennan accepts a contract for a high-paying demolition job in the desolate New Mexico sprawl outside Las Cruces. When he and Jane arrive at the site, they are suddenly taken hostage by a dangerous couple, who will stop at nothing to retrieve what lies beneath the property. Now father and daughter must work together to outsmart their captors and survive the grueling night.