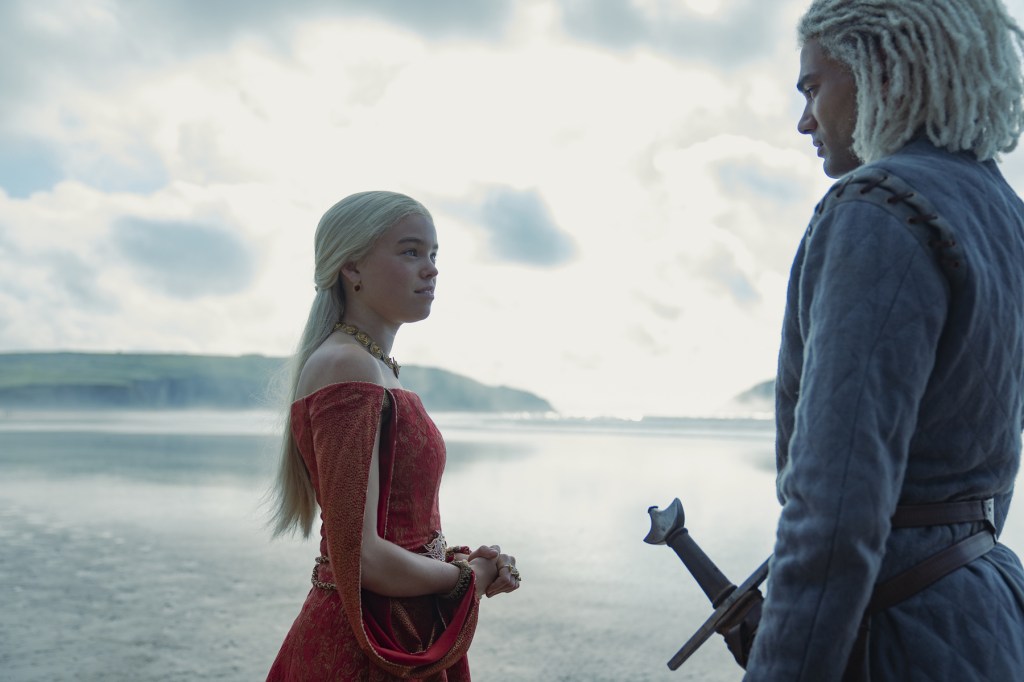 When it comes to weddings in Westeros, the vibes are always off. Think of King Joffrey’s marriage to Margaery Tyrell, which ended with him turning purple as he choked to death. Or of Sansa Stark’s two depressing betrothals, first to Tyrion Lannister — who was no happier about it than she was — and then to Ramsay Bolton, the less said about whom the better. Remember Daenerys Targaryen’s grim, nonconsenual union with Khal Drogo over in Essos? And, of course, there’s the still-legendary Red Wedding, a bloody landmark moment in pulling-the-rug-out-from-under-the-audience TV history.

Did you think that just because House of the Dragon is a new show, weddings would be any different? Ha!

While this week’s episode is centered on the nuptials between Princess Rhaenyra Targaryen and Laenor Velaryon, heir to the fortune created by his adventuring father Lord Corlys, it’s not the only portrait of, er, wedded bliss that it features. First, we get introduced to Lady Rhea Royce (Rachel Redford), the estranged wife of Prince Daemon Targaryen. And then, within a minute or two, she’s already dead, crushed by her horse and brained with a rock at the hands of the Rogue Prince himself. Daemon has greater ambitions than a marriage to a mid-level noblewoman, so she had to go. (Not that this will stop him from claiming her inheritance later in the episode. Always thinking, our Daemon!)

The main event, though, is the engagement of Rhaenyra Targaryen to Laenor Velaryon — a union of two of the richest and most powerful houses in the realm, both of them descended from Old Valyria, both of them dragon-riders to boot.

It’s really not that bad of a match! For one thing, it satisfies the pair’s powerful fathers, King Viserys and Lord Corlys; the two proud men reach a compromise in which the couple’s kids will take the Velaryon name until they ascend to the Iron Throne, at which point they’ll become Targaryens officially.

Even as their dads work out the details, Rhaenyra and Laenor reach a compromise of their own. Laenor is gay, and involved with a handsome young knight named Ser Joffrey Lonmouth, the Knight of Kisses (Solly McLeod). Rhaenyra herself has secretly been trysting with her sworn protector, Kingsguard knight Ser Criston Cole. The happy couple agree to do their “duty” and produce children, but beyond that, they agree to be free to pursue their own romantic interests outside the confines of the marriage bed. It’s a win/win, right?

Well, it depends on who you ask. Ser Joffrey has no problem with the arrangement, and even attempts to forge a connection of mutual trust and respect with Ser Criston during the welcoming feast for the wedding celebration. What he doesn’t know is that Criston simply cannot stand the situation. On their way home from the Velaryon home base called High Tide, Cole makes his pitch to Rhaenyra that they should run away to Essos together, forsaking their duties and living in freedom as they please. Unsurprisingly, Rhaenyra demurs, preferring her current position to a life of “infamy” on the run in the East.

But her promise to Ser Criston that she and Laenor have “an understanding” cuts no mustard with the Kingsguard kinght, who feels he has broken his vows and disgraced himself. A marriage might have redeemed him, in his view. But when Rhaenyra says no, he’s left devastated, adrift…and angry.

When summoned by Queen Alicent, who’s reeling from her father Ser Otto’s dismissal as Hand of the King over his accusations regarding Rhaenyra’s sexual conduct, Criston confesses that he and the Princess have been intimate. The Queen lets it slide. Whether it’s because she’s too upset that her old friend lied to her about her behavior, or because she wants to have a Kingsguard knight in her pocket, is hard to say.

But when Laenor’s lover Ser Joffrey approaches Ser Criston during the welcome feast with an offer of mutual secret-keeping, the Kingsguard snaps. He beats Joffrey to death right there in the middle of the party, leaving Laenor bereft and forcing the very, very sick King Viserys to accelerate the wedding plans and hold the ritual right then and there, instead the grand celebration he’d planned.

So, Rhaenyra and Laenor say their “I do’s.” The two mightiest houses in Westeros, both descended from Valyria itself, are reunited. Under the all-seeing eyes of a weirwood tree, Ser Criston Cole prepares to commit hara-kiri — until Queen Alicent shows up and stops him. Again, having a Kingsguard in your pocket is a valuable thing indeed. Since she’s has been convinced by her father that the future Queen Rhaenyra is a direct threat to the lives of herself and her children, the current Queen needs all the help she can get.

Oh, and in the episode’s closing moments, a rat enters the feasting hall and nibbles at Ser Joffrey’s blood. It’s a shot straight out of The Departed, and a suitable indictment of the sleaziness of these royal events. Is it a screamingly obvious image? Yes. Is screamingly obvious imagery sometimes required to convey the message of a particular story? Also yes.

Aside from the wedding itself, this episode sets up several character dynamics that seem important moving forward. For one thing, King Viserys is gravely ill: He’s wracked with coughing fits, his nose bleeds uncontrollably, and his body covered with unhealing wounds. (A young maester named Orwyle, played by Kurt Egiawan, suggests promising treatments, only to be overruled by Grand Maester Mellos.)

For another, we once again establish Corlys Velaryon as a justifiably proud lord. His castle is centered on the so-called “Hall of Nine,” essentially a museum filled with artifacts from his nine legendary voyages to far-away seas and lands. When Viserys shows up to broker the marriage pact, Corlys stays seated on his Driftwood Throne as if he’s the king. His wife Rhaenys, passed over for the Iron Throne in favor of Viserys, only adds to the sense that there’s a de facto second royal family in Westeros.

Then there are the sons of the Small Council’s most honest and least self-interested member, Lord Lyonel Strong. Larys Strong, nicknamed the Clubfoot on account of his physical deformity, sidles his way into Alicent’s good graces by informing her that Grand Maester Mellos delivered an abortifacent tea to Rhaenyra the night she was accused of fornicating. Meanwhile, his brother Ser Harwin, nicknamed “Breakbones” on account of his tremendous strength, rescues Rhaenyra from the chaos that breaks out when Criston Cole attacks Ser Joffrey during the feast. Look for both of these relationships to bear dark fruit in the weeks to come.

But the most important political and personal maneuver of the episode comes from Queen Alicent herself. Arriving late at the feast, she shows up in a green gown — the color not of House Targaryen, which is black and red, but of her own House Hightower. As Larys and Harwin gossip, the Hightowers fly green banners when they want to call their vassals to war. Has a war broken out for control of the Iron Throne, stemming from Alicent’s father’s warning that Rhaenyra would put the Queen and her children to death to secure the crown? It sure seems like the answer is yes.

And meanwhlie, the newly single Daemon makes a move on Laena Velaryon (Savannah Steyn). As we often say, what could go wrong?

All told, this is a rich and complicated House of the Dragon episode, in which virtually every main character has their story advanced in memorable and dramatic ways. It’s a high point for several of the actors involved as well; we’d personally single out Emily Carey as Alicent, whose conflicting loyalties to her house, her husband, and her old friend Rhaenyra threaten to tear her apart. And if another major time jump is on the way, as seems to be the case, it sets up the new status quo in a vivid and violent way. Long may these dragons reign.