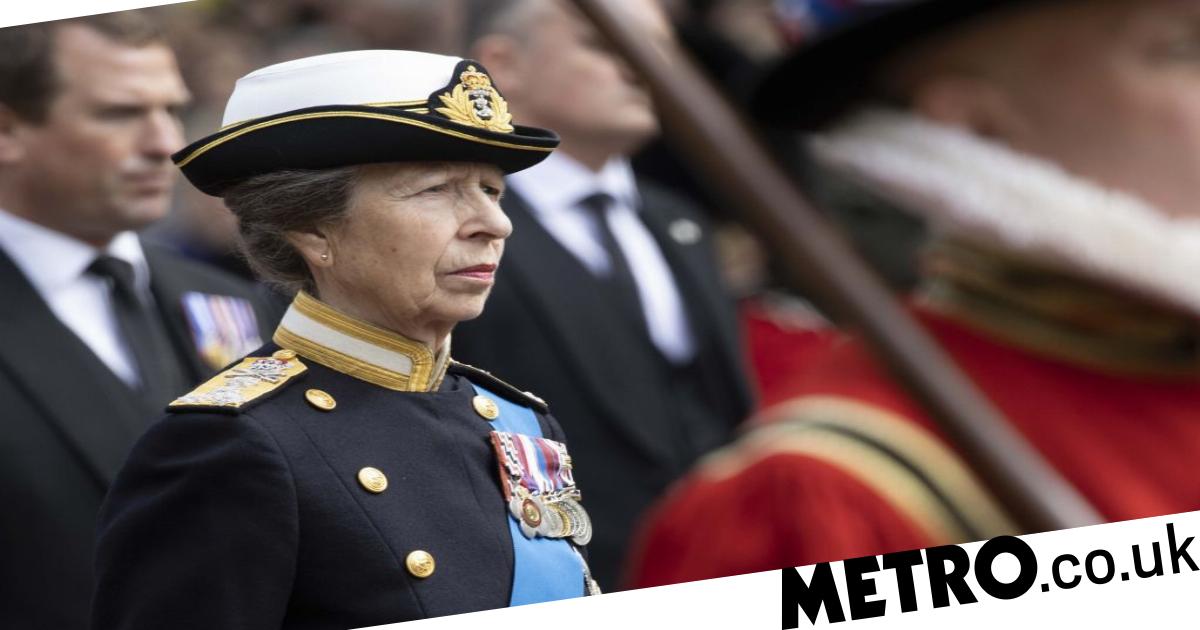 Queen Elizabeth II’s daughter Princess Anne has long been one of the most admired royals.

The 72-year-old is frequently dubbed the ‘hardest-working member of the Royal Family’, as she is known to dutifully attend hundreds of engagements per year and represent countless charities.

Kevin S. MacLeod, the Canadian Secretary to the Queen, said of Anne in 2014: ‘Her credo is, “Keep me busy. I’m here to work. I’m here to do good things. I’m here to meet as many people as possible”’ and she means this – she has often carried out more public duties per year than any other royal.

Though we often call her Princess Anne, as she was titled upon birth, Her Royal Highness is actually The Princess Royal.

As she stands vigil with her siblings, what exactly does ‘Princess Royal’ mean?

What does the title Princess Royal mean?

The Princess Royal is an honorary title given by a monarch to their eldest daughter.

A truly high honour for a female member of the Royal Family – it’s not a title that is automatically inherited at birth.

Once bestowed by a King or Queen, it is lifelong, superseding other titles and belonging to that individual until they pass away. That said, it isn’t hereditary, so isn’t passed down to their children.

‘The Princess Royal’ first dates back to the 1600s, specifically 1643, when Princess Mary of Orange was the first to be given the title by her father King Charles I.

Some say her mother Queen Henrietta wanted to fashion something similar to ‘Madame Royale’ (Royal Lady) – a French royal title given to the eldest daughter of a king.

Who else has been Princess Royal?

In the most recent use, The Queen made Anne The Princess Royal in June 1987.

She will therefore be known as Her Royal Highness The Princess Royal for the rest of her life.

While Anne does have a daughter, Zara Tindall, she could not inherit this title. The title would return to the monarch King Charles III, who does not have any daughters to give it to.

Before Anne, there were only seven Princess Royals in British history.

The first, Princess Mary, died in 1660, and it was then given to King James II’s daughter, Princess Louisa Maria. She was born in exile, though, and held the title until 1712.

In 1727, the title was bestowed to a different Princess Anne (obviously) and held until 1759, before King George III gave it to daughter Princess Charlotte in 1789.

Queen Victoria gave it to daughter Princess Victoria from the age of one, so she held the title from 1841 until her death in 1901, when King Edward VII and Queen Alexander made Princess Louise the holder.

The daughter of King George V and Queen Mary of Teck – Princess Mary, Countess of Harewood – was the last Princess Royal before Princess Anne, being bestowed with the title in 1932.


MORE : Did Princess Anne, Prince Edward and Prince Andrew serve in the military? Their uniforms explained


MORE : Princess Anne says ‘it has been an honour’ to accompany Queen on final journeys


MORE : ‘Not Bloody Likely’: What happened when someone tried to kidnap Princess Anne in 1974?