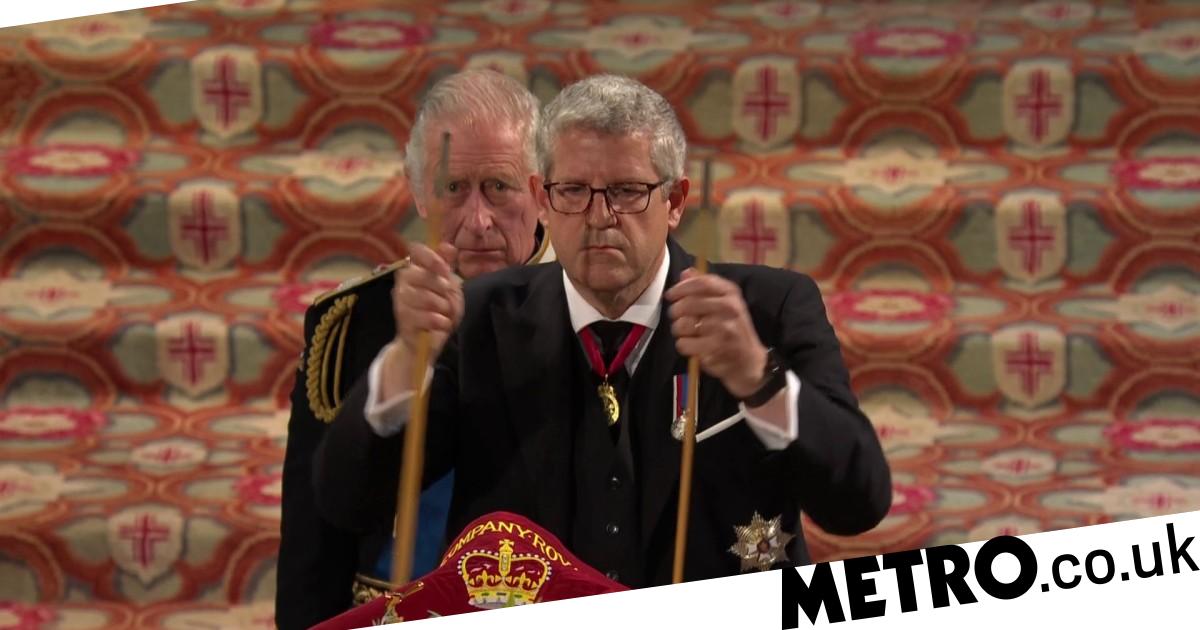 The funeral saw some 2,000 attendees including world leaders and celebrities – while the service in St Georges’ Chapel was a more intimate affair where close friends and family can say their final goodbyes.

In a ceremony filled with symbolism, the funeral involved one final piece of pageantry at the end – the breaking of the Wand of Office.

But what is the meaning behind this unusual tradition?

What is the ‘Wand of Office’?

The wand of office is a thin staff and ceremonial tool that was originally used for discipline.

As the most senior official of the Royal Household, responsible for keeping order, it could be used to discipline rowdy courtiers.

The Lord Chamberlain would use the wand to tap them and warn them to behave.

Special rods and staffs are a long-standing tradition, with the Queen herself owning multiple scepters and rods among the royal jewels.

Why does the Lord Chamberlain ‘break’ it?

At the end of Queen Elizabeth II’s funeral, The Lord Chamberlain, Lord Andrew Parker, symbolically broke the Wand of Office and place it on her coffin.

This signified the end of his service to the Queen as sovereign.

Head to Metro.co.uk’s Queen Elizabeth II tag page for the latest updates, and sign Metro.co.uk’s book of condolence to Her Majesty here.

The practice dates back many centuries, and was last performed 70 years ago when the Earl of Clarendon broke his staff over the grave of George VI.

The Lord Chamberlain is the most senior position in the Royal Household, and this is the person responsible for all departments, organising events, and working with the House of Lords as a liaison between them and the sovereign.

Previous rights also included the ability to censor theatre, which came to an end in 1968.

The position was originally part of the Cabinet, and remained political until 1924.

Lord Andrew Parker, Baron Parker of Minsmere, was appointed to the role on April 1, 2021.

He is a former British intelligence officer who served as director general of MI5 from 2013 to 2020.

One of his first jobs as Lord Chamberlain was to organise Prince Philip, Duke of Edinburgh’s funeral.

Schedule for The Queen's funeral

6.30am: Lying-in-state at Westminster Hall will end.

8am: The doors to Westminster Abbey, where the funeral will be held, open three hours early to the 2,000 invitees.

10.35am: Her Majesty The Queen’s coffin will leave its current location of Westminster Hall, where HM is lying-in-state, and travel in the State Gun Carriage to Westminster Abbey.

A procession, led by the Royal Navy, will lead through New Palace Yard, Parliament Square and Broad Sanctuary and the Sanctuary, before reaching the Abbey.

The procession – which will be to the sound of bagpipes and muffled drums – will be joined by King Charles, Princess Anne, Prince Andrew, Prince Edward along with Prince William and Prince Harry.

10.52am: The Queen’s coffin will arrive at the Great West Door of Westminster Abbey.

11am: The Queen’s funeral will begin.

11.55am: The funeral will draw to a close with the sounds of the Last Post.

12pm: The UK will observe a two-minute silence at the end of The Queen’s funeral.

12.15pm: After the funeral, The Queen’s coffin will travel by gun carriage from Westminster Abbey to Wellington Arch near Hyde Park Corner, before continuing on to Windsor.

1pm: Just after this time, Her Majesty’s coffin will be moved from the State Gun Carriage to the State Hearse, and travel from London to Windsor on an as-yet unknown road.

3.15pm: Now in Windsor, the final procession to St George’s Chapel at Windsor Castle, via the Long Walk, begins at Shaw Farm Gate on Albert Road.

Once again, there will be a process of Royal Family members and The King behind the State Hearse.

4pm: The Queen’s coffin will be carried into St George’s Chapel, where a televised Committal Service will take place, held by the Dean of Windsor.

7.30pm: The Queen will be interred alongside Prince Philip at King George VI Memorial Chapel in Windsor Castle privately.


MORE : Queen returns home to Windsor to be reunited with her beloved Philip


MORE : The Queen’s committal order of service in full